For our last day, we decided to visit the New England Aquarium. The last time I have been to an aquarium was back in 1997, when we visited the Kaiyuukan in Osaka. So this time, I am quite excited.

Oh, and what fun seeing penguins, anaconda, weird fish, sharks, turtles, and other swimming animalia is. I took plenty of pictures, and it's a good thing that my camera could handle the light situation. I was most impressed with the jellies, which were so surreal and bizarre.

After visiting the aquarium, we decided to walk the waterfront, where Boston's glitterati play. Then, we headed back to Quincy Market to get some souvenirs.

Then, the inevitable happened. We realized that most, if not all of the sites in Boston that we wanted to visit were already visited, and there wasn't anything else to visit. Yeah, it was about 3:30 PM, and we were in the city with nothing else to do. It's already too late to say for example, take a day trip to Salem or something similar, so we just decided to kick back and watch a movie. We ended up watching The Invention of Lying, which was a great satire movie.

After the movie, we headed to a Vietnamese joint, and got ourselves some pho. That was awesome. Good thing I had my fix of Vietnamese food here, since I don't have much chance of getting it in Buffalo. So yeah, I am ready to go back.

Tomorrow, all I need to do is pack. I have a flight in the afternoon, and then the day after, it's back to the regular routine again. 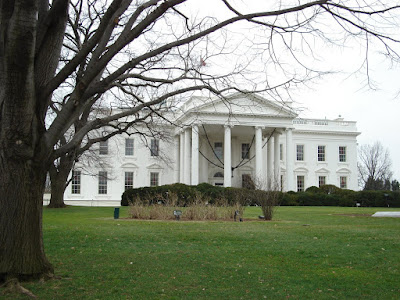 (The White House, from my Lafayette Square Series)