The thing is, I have a few bands that I like most, if not all of their songs. Bands like The Cranberries, Chevelle, 30 Seconds to Mars, Garbage, Smashing Pumpkins, and so on.

My good friend on the other hand dislikes several acts categorically, and by this, she means that she dislikes whatever song these acts sing, such as Lady Gaga and Katy Perry.

The thing is, one argument for being able to categorically disliking a song due to the singer is that if one really dislikes the way a certain singer sings, then no matter what song the singer sings, then it will turn out bad. The content of the song is variable, but the quality of the singer's voice and style is assumed to be constant in this view. Now, according to this view, the reason why it is not possible to categorically like a song due to the singer is that one is never sure what the content of the song is going to be. Thus, if there is a very crappy song by its content, no matter how good it is sung by the singer, it will still be disliked.

I believe otherwise. For me, everything is variable. Voice quality is variable, so is style and content. However, my model is a statistically sound model, by integrating previous data points and then using these data points as predictors of whether future songs from this singer will be liked or disliked.

Case in point: I like the band Chevelle a lot. I discovered their music back in 2001, while watching a show in MTV where they were featuring rock music for the whole hour. I like their extraordinary use of guitar, and the way Pete Loeffler sings. I have a copy of all their albums. And so based on the impression that I get from their songs, chances are, if they come up with a new album, I will also like them. See, what I am doing is making a predictive and probabilistic model of whether I would like a song or not. I have always liked the voice quality of Pete Loeffler, not as a stipulation, but based on evaluating every song I have heard that is sung by him. I always liked the topic of their songs, again, not as a stipulation, but by evaluating the topic every time a Chevelle song would play. And thus, these factors all increase the probability that whenever I hear another Chevelle song, I would like them. Thus, I can confidently say that statistically speaking, I can like a Chevelle song, whatever the song may be. I can therefore claim that I can categorically like Chevelle music.

Let's take another example: Colbie Caillat. This is a singer that I feel ambivalent about. She has two songs that I didn't like: the one that talks about toes and picking your nose (aka Bubbly), and another one that featured a very repetitive word, "realize" (which is titled the same way). I hated the first song for being silly, and I hated the second song for using that word over and over again. However, I saw a video of her singing a rendition of the song Don't Cha by the Pussycat Dolls. This is a song that I didn't like at all, but when Caillat sang it, it was transformed into this very beautiful song. Another song that I liked that Caillat sang was Fallin' For You. It is being played in the radio nowadays.

So, what do you think? Can you categorically like or dislike music? 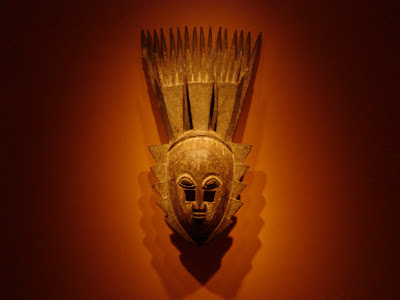 (Dramatic Mask, from my Sackler and Freer Collection Series)