Earlier today I had a conversation with a former student. And that was just a feel good moment.

See, this former student of mine took my 100-level class two years ago. It was a class that basically introduced the different languages that are found around the world, and how they are similar and different when it comes to structure. Basically, this was a class that a trivia person would dig.

So, I bumped into this former student of mine, and he told me that he is now a minor in Linguistics, and that it was after taking my class that he got interested in the whole field and decided to do a minor in it. Wow. I didn't realize that I can have an effect in other people too.

So there, I saw people who were majors in Linguistics when I taught the class the very first time, but ceased to be a major, perhaps due to me, but now I learned that I am also capable of the other way, of inspiring people to take up a field simply because they found my class interesting. 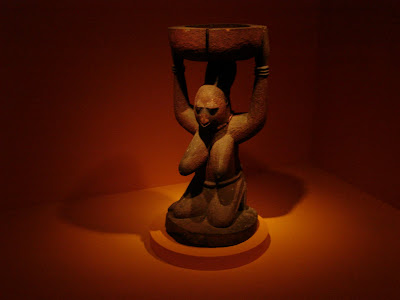 (Fertile Woman, from my Sackler and Freer Collection Series)