Once upon a time, a linguist realized that English and Sanskrit were very much related. There were similar words across the two languages, and upon further scrutiny, it was found that English and Sanskrit are related. Thus, the world realized that there is one such language family called Indo-European. This language family extends from the Celtic languages in Ireland and Great Britain to the languages found in the Indian sub-continent.

How does one establish a language family? Well, people can examine how similar or different each languages' vocabulary is. People can examine a core vocabulary and see how much they vary. The words in this core vocabulary should be words that are thought to be highly resistant to borrowing, such as kin terms and body parts. One can also examine the syntax or word order of the languages. The more similar things are, the easier it is for people to establish the existence of a common language family across the languages.

Of course, there are language families that are smaller than these two. And there are also languages that do not belong to any language family. Theorists have claimed that Japanese is one such language, but this is not firmly established yet. Other languages, such as Basque (found in Spain and France) and Burushaski (found in Pakistan) are clearer to be language isolates, since they are clearly very unrelated to the languages that surround them. 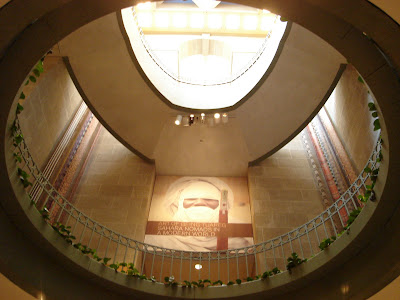 (Atrium, from my Sackler and Freer Collection Series)