Yesterday, my good friend and I went to see a play produced by the university's Department of Theatre and Dance. The play was entitled Tattoo Girl, written by Naomi Iizuka. And honestly, this is one of the best plays that I have ever seen.

The play was produced in the Blac Box Theatre. This is a theatre in the university that is rather flexible in design, and this is the third play that I have seen in this venue, the previous ones being Spring Awakening and The Shape of Things. And I suppose third time's the charm.

This is a surreal comedy, blending together ideas from the ancient martyr Perpetua, a soldier in the early 20th century, and the gymnast Nadia Comaneci. The stories in this play flow in very different directions, and the storylines are just surreal and non-linear. This play takes a different mind to entertain. While watching this play, I was laughing hard and thinking all the time that this must be stream of consciousness, at least in the theatre mode. I could totally see this play as being a depiction of how my mind would work perhaps.

Anyway, I liked the way the Theatre Department produced this play. The actors were always in their character, and as always, I am impressed at the quality of their performances. Just ten people playing many different characters, even including a talking dog, was just awesome. I love how they nailed the various accents required in the play, from Romanian to French to whatever the accent Marshal Foch had to have, although it seemed he was German rather than French given the accent that he had.

So, overall, I had fun on a quiet Friday night. While the rest of the world is partying in rather bizarre costumes, I had fun in my own way. 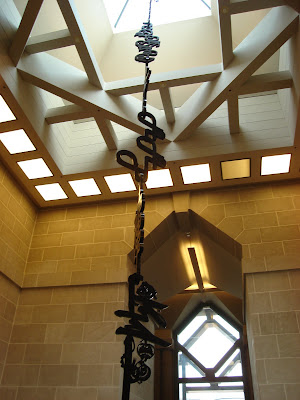 (Writing on the Ceiling, from my Sackler and Freer Collection Series)