The other day, the ninja and I wanted to just hang out together, so I asked whether she would be interested in seeing a play that was being produced in campus. The director happened to be the son of a professor in the department, and the director's sister is a good friend of mine as well. So we went, and we didn't really expected anything from the play, since I never heard of Harold Pinter before, and therefore didn't have any idea what the play was about.

It was rather intense.

The play was Harold Pinter's The Dwarfs, and it told the absurd story of three men, two of them being played by women actors, and five dwarfs. It was very surreal. It was very intense as well, that the ninja remarked that her neurons were overfired.

The beginning of the play was quite interesting. There were five characters all dressed in black, presumably, they were the dwarfs. They had bizarre hand and foot movements, and obviously they were annoying each other. It seems that whenever they hear something mentioned by the audience, they repeat that. That was quite funny. And then the play began. The dialogue was rather bizarre as well. It was all bizarre.

Now, comparing to Tattoo Girl, I wasn't quite amused by this play. I didn't know how to process it, given the fact that I don't have much experience when it comes to absurd theatre. Although I have to say that it wasn't the case that I didn't like it. I just needed more time to sink it in, and ponder on the strangeness of the play. I guess this is a play that is not for everyone. It is rather hard to comprehend, and although I like the way the director manipulated the play, the story was, hmmm, very Pinteresque? 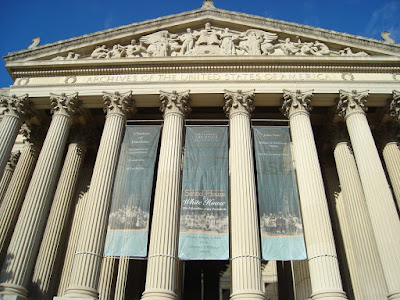 (Another Angle of the Archives, from my DC Buildings Series)