This past week was fun and disastrous at the same time. Well, this weekend was the weekend when two of my friends from Toronto were visiting me, so that was fun (and worth of a separate blog entry) but at the same time, Mr. Murphy decided to pay me a visit as well, so he did by making me sick.

It started last Friday, when my other friends and I went to dinner in a Thai restaurant. I usually get what we get, which is an order of fresh steamed dumplings, and then we split a beef Pad Thai. After that, I went home and took a nap (my Canadian friends won't be arriving until late at night).

My stomach started to act weird. It wouldn't digest. I felt bloated, like a balloon. And so I was there, like a stuffed turkey, laying down in bed.

A few hours later, my friends arrived, and we had a good time having good conversation while consuming a couple bottles of Cabernet. However, it would have been better if my stomach cooperated.

The next day, it was a little better. I did quite a few trips to the restroom, emptying my digestive system. But, new symptoms appeared. I have a headache, and I also felt like I had a slight fever. The three of us had breakfast, and then we watched a musical on campus, and then we ate dinner, but all this time, I wasn't feel well. My stomach felt like it was being wrung like a piece of laundry. And my shoulders and arms hurt like I rock-climbed for a week. So, stomachache, diarrhea, fever, muscle pain, headache: this sounded like the flu.

Since I got the flu vaccine two months ago, only one thing came to my mind: this must be the swine flu.

Throughout the night, I went to the bathroom for a couple more times. I then took acetaminophen and loperamide to deal with my fever and muscle pain and diarrhea.

Which brings me to Sunday. I just stayed in bed for the most part, and my fever and muscle pains subsided. The diarrhea was also controlled. So maybe it was food poisoning after all. And according to Wikipedia, both swine flu and food poisoning have similar symptoms. So, if by tomorrow, I am well, then I could safely eliminate the flu. 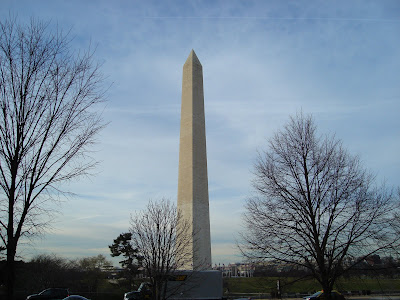 (The Obelisk, from my DC Buildings Series)