No, the next word isn't going to be Mary.

Anyway, the first snow of the season was today. In an atypical fashion, it snowed here in Buffalo after Halloween. People say that it usually snows at least once before Halloween, and for the past few years it has been true, but for this year, it didn't happen. But today, well, the forecast yesterday was that it will snow today, and sure enough, even for a brief period, it did.

I was in my office, and then the sky suddenly became dark. The clouds all came in, and then hail fell. There's these little balls of ice that fell from the sky, and they crowded the window sills. They fell and fell, as if the sky was one giant ice cube maker.

Then it transitioned to snow. The flakes descended, and they coated the ice cubes with this white frosting, but sure enough, for the first snow of the season, it was brief and fleeting, and the sky suddenly turned blue again and there was the sun. 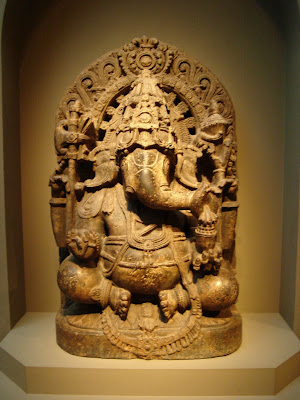 (Lord Ganesh, from my Sackler and Freer Collection Series)