So the past weekend was filled with occasions in which I was sitting in front of the computer, plugging numbers in a spreadsheet, and doing statistical tests on it. And after a battalion of these tests, I printed some numbers and made some graphs. And boy, the results were pretty.

So, last Saturday, I conducted a series of T-tests, because we were comparing the means of two different samples. Ideally, there should not be a difference, because theoretically, we were predicting a null effect. However, there was. And after some thought, of course, given the manipulations that we did, there should be a difference, but it was not the difference that we were interested in.

So, we had to go to Plan B. Good thing though that I designed the experiment in such a way that we can recode the data and rerun a different test without conducting the whole experiment over again. So, some of the conditions that we weren't interested in suddenly became a condition that we were interested in, and it was a good thing that they were not haphazardly designed, and so there was no worry that the design was crap. I just had to make a few tweaks here and there.

Thus, after the tweak, I ran a one-way ANOVA, and after seeing the plots and the graphs, I was happy. The thing that we were trying to investigate was very much supported by our numbers. The comparisons that we were predicting are still there, and our predictions have empirical support.

Earlier, when doing the T-tests, I realized that the data was divided in two ways. There was one group of people that was functioning one way, and another group of people that was functioning another way. The group division was rather large: it wasn't just one or two people in the sample, but a big one-third of the sample was behaving differently. So we deemed that we had to explain this. I re-ran the one-way ANOVA with the split data, and sure enough, the graphs between these two groups are largely different. And this was enough to make me and my co-author happy.

So what did we see? Based on the construction that we were investigating, there seems to be two dialects of the target language. The language that we are investigating seems to vary along the dimension that we were manipulating. And this is an important fact since a lot of theoretical linguists out there claim that there is no such divide.

Unfortunately, I do not feel like describing this in more detail here, since it is not just my research, it is a collaborative one, and I would rather describe it in more detail once this is published. Anyway, we think that we now have material for a conference presentation. We have a month to write an abstract, and hopefully, this gets accepted for a conference in March. I smell another line in my CV... 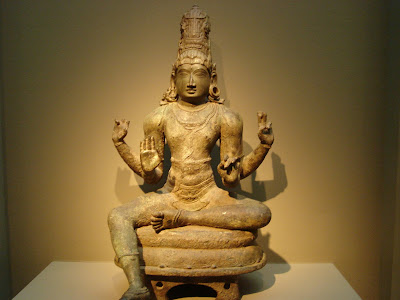 (God Statue, from my Sackler and Freer Collection Series)