Now that was a fun evening. I never realized how fun pizza-making can be (of course, we were just spectators). But it looked so easy, as long as one has those wide wooden pans in the oven, and in a few minutes, the pizza will be done. It was nothing like Domino's or Pizza Hut, the crust was thin, the flavor was original, and the taste was great. It now makes me tempted to try making them myself.

I also got acquainted with a few aperitifs and digestives, such as pastis (similar to absinthe) and limoncello. Pastis is a French aperitif that one dilutes in ice cold water. One part pastis and four parts ice water should be the ideal. It is anise-flavored, just like absinthe, and the liqueur exhibits the ouzo effect, which refers to the cloudy phenomenon once one adds water to the liquid. Playing with my friend's one-year old kid was fun while enjoying pastis.

Then we made six different pizza types, and consumed it with some riesling from Germany. We also watched ski movies shot in various locations around the world, such as Tanzania and Iran (I suppose not a lot of people would think that one can ski in those two countries, eh?).

Finally, we played scrabble, but without taking scores. I guess it's more fun that way. I had a taste of limoncello, which is this Italian liqueur that has the flavor of lemon zest, but it isn't sour at all, because there isn't any lemon juice in it. Some people think it tastes like dish detergent, but I didn't think it was the case.

Anyway, all in all, the night was fun. For a few hours, we were able to escape to Lugano, and forget about the worries that awaited us outside of the door. 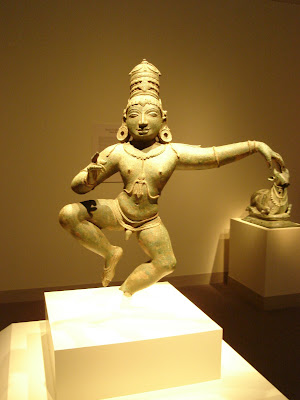 (Floating God, from my Sackler and Freer Collection Series)