Yesterday was one of those days in which I just had to stay home and do my house chores. I know, I am a workaholic and there are plenty of things that I can do if I will myself to do it, but for once, procrastinating isn't a bad thing I suppose.

So, even though I already was awake by about 6:30, I didn't get out of bed until 10:00. And then I decided to do my laundry. I had breakfast while doing laundry, and then went ahead and ironed my clothes. By about 1:30, I was done with everything.

What else happened? Oh, I chatted with a friend online, caught up on things and such, and then an idea popped into my head. I have a project. My head conceived The Project.

See, growing up as a diplomat's kid causes one to have a chronic infection of the travel bug. One just cannot stop thinking about travel. One gets excited when one is in the vicinity of airports. One stops walking on the street when there is a plane over-flying. Travel just carries this sense of excitement, that no matter how much amount of travel one does, one never ceases to feel the excitement and anticipation that accompanies it.

So, given the fact that I have been fermenting here in the United States for more than a year now (the last time I have been out of the country was July 2008), I decided to start planning for The Project. Watching the latest season of The Amazing Race gave me ideas. The Project will be long, it will take about 6-8 weeks depending on how I plan this thing. It will involve land travel, it will involve plane hops, and it will involve border crossings.

Where will this be? I am not telling yet. Besides, this is all just in paper, at least for now. On top of that, I need the time and money to actually accomplish this. So it won't be within the near future. But hey, there isn't anything wrong to dream, eh? So yeah, there exists The Project. Hopefully I can execute this sometime. 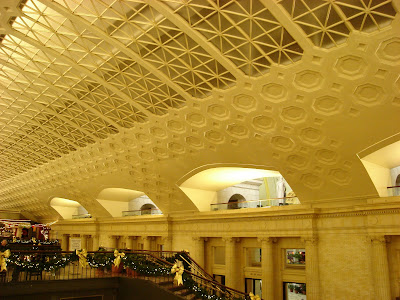 (Christmas in the Station, from my DC Buildings Series)