This past weekend saw the season finale of The Amazing Race. I have been an avid follower of this show, and, except for the Family Edition (Season 8), I always liked them. This time around, I liked them as well.

First, the team members. Well, there was an interesting twist here, where one team didn't even get to ride a plane. Well, that was Eric and Lisa, and upon reading the relevant news articles a few weeks back, it seems that they left the show and therefore was not sent to the Elimination Station. They therefore weren't shown in the final episode. That's fine, as long as you're not bitter about it. Entering The Amazing Race means leaving one's expectations at the door, and so if one is eliminated right at the outset, then accept that.

Then you have team members that seem to have their greatest fears. Like, Mika, what was that? Back in Dubai, they had to go through this high water jump, and she just couldn't do it. Because of that, they were eliminated. Wow. If one wanted to join The Amazing Race, one needs to expect that they will do pretty much everything, from jumping up a high building, to going to a very high place, to swimming in one's underwear. One needs to drive, walk, bike, take a taxi, and so on.

And what is it with team members being mentally challenged, in one way or another? They were in the Czech Republic, and there was a Kafkaesque challenge, and one team couldn't for the life of them figure out that the letters Z-N-R-F-A spell Franz, as in Franz Kafka? And another team don't even know that the most famous casino in Monaco is the Monte Carlo! They should play some more Trivial Pursuit.

The locales were pretty interesting this time around. I am glad that they didn't visit India again. I have nothing against India, but hey, they've visited that country for more than five times already, if I remember. Same thing with China. So I am grateful that they didn't visit those two countries and instead added new countries to the collection, such as Estonia and the Czech Republic. I also liked the fact that they went around the world crossing the Pacific, instead of the Atlantic. Asia is usually more challenging than Europe, so it weeds out the less travel-savvy of the group.

The thing that I didn't like about this race was its compactness. Yes, it spanned 21 days, but it only covered three continents: Asia, Europe, and North America. I wished they were a little more all over the place. I remember a previous season where they visited all continents in the race, and that was very awesome in my opinion. Oh well, I am just an avid fan.

Anyway, sometimes people ask me if I would want to do The Amazing Race. Probably not. I don't need that much of stress in my system. Heck, I get stressed just watching them. I get moments watching these that I see the clue and immediately the right answer pops in my head, but when I travel, I actually want to enjoy the place, instead of just zooming by. 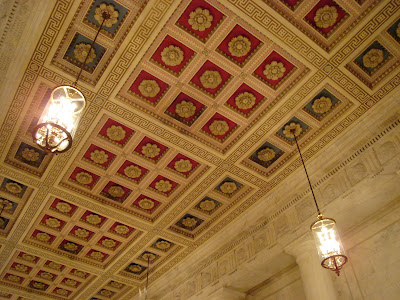 (Ceilings of Justice, from my DC Buildings Series)