Book Review: The Five-Forty-Five to Cannes by Tess Uriza Holthe 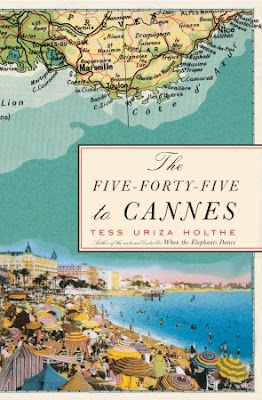 I suppose my opinion towards short stories has changed over time. I used to not like them, because my main reason for that is that I hate the fact that the story ends when I am just about settling into the characters and plot. I finally become accustomed to the characters and then I find the story ending, with a new set of characters on the next story. That's why I preferred short stories that have a common theme to them, and this one is I suppose the best example of a short story collection that I would like.

The Five-Forty-Five to Cannes is a collection of short stories that revolve around a group of people that for some reason or another are related to each other. The stories occur in and around Cannes, spanning from Barcelona to Milan to Aix. There are several threads to the whole collection.

First, there is the story about Claudette and Chazz Jorgensen. Chazz is a millionaire, and he met Claudette, who was this French waitress, while on vacation in Cannes several years before the story even began. Claudette broke off an engagement with another guy named Laurent Barr, in order to marry Chazz. However, Chazz has a mental illness, and it progresses until their marriage almost disintegrates. One day, Chazz on impulse books a ticket to Milan and takes the train to Cannes, where he is chased by two Romany pickpockets, until a taxicab hits Chazz and then he dies. Claudette's life is further elaborated in some other story, including her ambivalence with respect to selling the chateau that they both own in Cannes.

There is also the story about Laurent Barr and his Brazilian wife Serena and his mother. Laurent was engaged to Claudette but his engagement was broken by Claudette as mentioned earlier. Then, he meets Serena, but his mother is partial to Claudette. His mother dislikes Serena for some reason, and Serena is in a way jealous of Claudette. She poses as a potential buyer for Claudette and Chazz's chateau in order to try to find out who was the woman who dumped Laurent for her. In the meantime, Laurent's mother is irrational in the sense that she dislikes Serena for some reason, and at a brief episode, was pickpocketed by two Romany, the same two Romany who were involved with Chazz.

There is also the story of the Romany brothers. There's three of them, actually. GianCarlo, Marino, and Angelo. They pickpocket the Italian train lines. They have rival French gangs. GianCarlo wants to stop pickpocketing, but his heritage as a Romany somehow holds him back. Marino is in love with a French girl who belongs to a separate gang. Angelo is the eldest, and he changed a lot ever since their parents died. They are related to the other characters because at one point or another, the other characters have been victims of them.

There's also a couple of minor story lines, involving a lace designer and his three wives, a former convict who is now a ferry driver, and a hitman from Scotland. All of these intersect with the characters above.

So the thing I like most about this short story collection is that it feels like a puzzle, where every chapter is a piece that I can connect with the previous piece to make a whole. It's very coherent, and sustains the interest of the reader since the characters are all linked together even though every chapter is in essence a separate story from the previous one. I can see this as one complex novel, or a very sophisticated short story.

Is there anything bad about this book? Probably not. I'll give it 4.5 out of 5 stars, the only thing holding me back from giving it a full score is that as much as I liked the concept, it wasn't a moving book. It didn't tackle strong metaphysical issues the way Jose Saramago does. But hey, that's just a personal preference of mine. I would still recommend this book to anyone.