I watched The Fountain for the second time the other day. The thing is, the ninja hasn't seen it before, and I recommended it to her so that we can watch it together. So that's what we did.

And again, I enjoyed the movie. It was very philosophical. And I cannot understand why my sister who is such a good movie critic didn't like this one.

The thing is, the movie is about death. The movie is about how people should accept death as a normal part of being human. In all three segments of the movie spanning three different generations, the character that Hugh Jackman plays is one who is the seeker of eternal life. The conquistador goes to Guatemala to search for the tree that grows from the navel of the earth, whose sap brings forth eternal life. The oncologist is doing research on rhesus monkeys incorporating a serum from the tree in Central America in search for the cure of death, which for him, is just a disease. And the astronaut is on his way to Xibalba, the nebula where he wants to be reborn.

The character that Rachel Weisz on the other hand plays is one who has accepted death. She is not afraid of dying anymore, and has come to terms with it. She is the most peaceful character in the movie.

Some people take as an argument the human body's apparent ability to regenerate at the cellular level, that we can heal and therefore in theory, should be able to live forever. But no, that is not the case. Women, when they are born, are already equipped with all the egg cells that they can have in their lifetime. Other biological aspects of being human are also subject to maturational constraints.

Anyway, I guess this movie has such an effect on me that I don't mind watching it again. I can see how this is different from the previous two Aronofsky movies, Pi and Requiem for a Dream, but I never felt that this movie was a flop. Yes, it was somewhat of a departure from the style that he had in the previous two movies that he directed, but I didn't mind that at all. This movie is one of the most philosophical movies I have seen, and I am glad to have seen it. 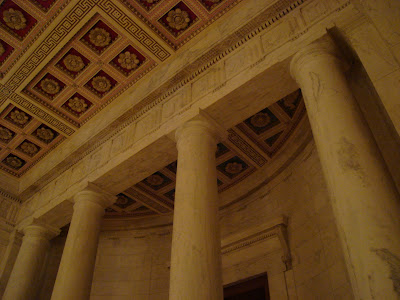 (Inside Columns, from my DC Buildings Series)