Humans are social beings. That's at least what my T-shirt said at the back, which I got from my college back when I was in undergrad. After all, I belonged to the College of Social Sciences and Philosophy, which was a unit in the University of the Philippines. So we had a college shirt, and that was what it said one year. I happened to like it, so I bought one.

Anyway, there are times in which I feel that humans are too social. Too social that other people are turned into victims.

A person very close to me once complained about how people around her circle make stories about her and her close friend. The thing is, she has a best friend, and that best friend happens to be a guy. They haven't seen each other for a long time, and so they were initially planning to have a vacation together. Now, to cut down on expenses, they decided that they would be bunking together while traveling.

Now, in this 21st-century world, that would have not posed a problem at all. However, due to certain traits in other people that belong to their social circle, they decided to avoid this. Why? Other people wanted stories, so they would just create stories about these two people, and spread rumours about them, and run these stories in the rumour mill. It gets so bad that people start living their lives not because they want to, but because they simply follow the dictates of other people.

So, should I bunk together with a member of the opposite sex? Yes or no? Should I stay at a friend's house while visiting the country when my parents' house are just in the same neighborhood? Yes or no? Decisions such as these should come up easily, and yet people are forced to make decisions not because it is the most rational one, but because it is the most uncontroversial one. This I do not understand. Why do other people force other members of their society to conform?

Maybe because this particular social circle are discouraged to venture out. Maybe because all the people they know is this small group of people, and they don't know anybody else outside of this small group of people. Maybe they are so bored in their lives that they needed the urge to create a story, but fomenting rumours and spreading them around. Maybe this is the result of years of fermented association with each other, and that everybody just knows everybody, that it becomes a detrimental combination of characters.

I find it very hard to understand that people need to act accordingly, just so that other people won't stumble and fall. That reveals an underlying problem: that most people cannot think for themselves. Everyone's decision is dependent on someone else's decision. If a girl wears a strapless blouse, or blue-shaded fingernails, is that kosher or not? Personally, it is, but other people may think that it isn't. So what does the girl do? Chances are, she would just refrain from doing it since other people may think that it is not kosher and therefore bad. Because if she does it but other people look down on it, then the others might stumble and fall. That just reveals a major flaw with respect to the other people: that they are easily swayed by others, and that they don't really believe in things they claim to believe in if their beliefs are easily toppled by a simple color of a fingernail.

Why is it that people find it very hard to use their own heads? Come on people, you all have brains in that skull. Use it, don't just follow what everyone else is doing. If you're not fully convinced of what you claim to believe in, then no wonder that all it takes for you to fall is a simple style of dress. 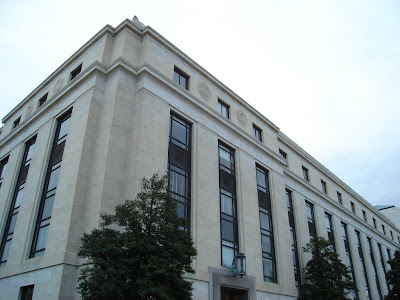 (Office Building in Capitol Hill, from my DC Buildings Series)