Warping into a Tavern

Yesterday was the day when the third-year doctoral students had to give their first presentation to the whole department. There is this requirement that was instituted in my year that the doctoral students had to do a presentation on their qualifying paper research by their fifth semester. So I did mine 2 years ago, and now, the people who came in 2 years later gave their talks.

There were two people who gave a talk. It used to be the case that their year included two other students, but for one reason or another, they both dropped out. So only two remained, and they gave talks yesterday.

It turned out well, and so afterward, the people from the year above them took the two of them to a restaurant, just to unwind and relax. I joined the group as well, since I am good friends with both of them.

We went to this tavern in Buffalo. It was locally-owned, and they didn't take credit cards; it was a cash-only establishment. They apparently were famous for good burgers, and they had plenty of selections for the beer. I got myself a Blue Moon, something that I enjoyed ever since visiting Portland, Oregon. I also got the sausage plate, and that turned out well too.

There was a rather big group, so I took the opportunity to mingle with the students that I don't really talk to, such as the first-years. I am a fifth-year, and so there is a four-year gap between us, and so there isn't much common ground. So I decided to chat with them while waiting for our food.

One thing that was a little cognitively dissonant though, was the ambiance of the place. Entering the tavern with the servers and the establishment in general made it look like we were warped into some bar in the wild west. Like it was some rugged bar in Montana or Colorado. Not that I had anything against those establishments, but someone wearing boots with spurs and a handgun would totally be in the scene in that establishment.

Anyway, that was well and fun, and so the night ended in a good note. I can only imagine what the next year's talks will be, given the fact that there is a large student body for next year who will give talks. 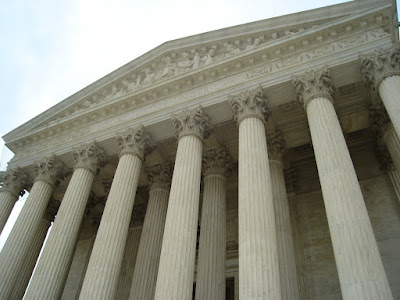 (US Supreme Court, from my DC Buildings Series)