It is funny that the moment the calendar changes to December from November, suddenly, the weather changes too. December 1 was the first snowfall of the season, and December 9-10 was the first blizzard of the season. There was this huge low pressure area extending from Arizona all the way to the Northeast United States which brought us not a lot of snow, but surely a lot of wind.

The temperature was about -9 Celsius, and the wind was just biting cold. I shoveled my driveway for the very first time this season last Thursday morning, and since the snow was just a few inches, it wasn't bad at all. But it is definitely winter here for sure.

It is funny how predictable the wintry phenomena are. Winds always blow from the west, so the north-south roads are the ones that are hit the worst. The snow just blows all over the place, and so the snowplows have a hard time controlling them.

The interesting thing however, is that on Friday, the sun shone bright, and even though the sun is out, the temperature is down. The presence of the sun and temperature are definitely not correlated with each other.

There were a few accidents on the road. I saw this one van who accidentally spun on the road, and because of that, a sign post that was about 3 feet high accidentally ended up underneath the hood, and he couldn't move at all since his van was rather impaled. People lose their sense of driving safety whenever the snow falls. They tend to ignore traffic lights and other signals, for reasons I somehow do not understand.

Anyway, the winter has not even officially started (it starts officially 10 days from now), but we already have wintry weather. And it is just the start. 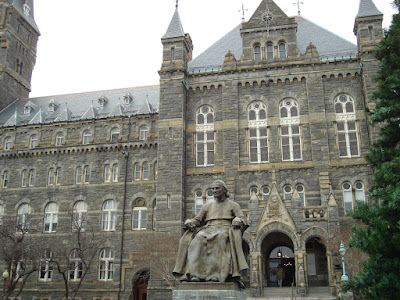 (Healy Hall and John Carroll, from my DC Buildings Series)