I finally did it. I converted to Google completely. My usage of Yahoo is now minimal.

So, I have been thinking about it for a while. The thing is, I only started using Google for stuff that I do recently. It all started when Blogger was bought by Google. So, I had to establish an account with Google to continue blogging, that was fine.

And then, I was able to migrate my school email to Google too, due to the fact that I technically am already an alumnus of the university, since I graduated last June 2009 with a master's degree. I was then eligible to migrate my official school email to Google, thus retaining the email address, so all my correspondence that are official, such as my CV, publications, etc, will not be compromised.

I then realized how awesome Gmail was.

Then, there's also the calendar issue. I used to have a Yahoo calendar, which was fine, except that I could only make one calendar at a time. So I cannot have overlapping calendars, and when I saw one of those, I was like thrilled with all the possibilities that a calendar such as that would provide.

Besides, I was collaborating with another graduate student, and we had to coordinate the times in which we conduct experiments. In order to do this online, the only way was to make a Google calendar that was shared across the two of us. The thing with the Yahoo calendar was that I could share it, but in doing so, I share everything. I only wanted to share a part of the calendar, and that was where Google calendar was great, since it allows one to make several calendars at once, and turn them on or off depending on what one needs.

So the other night, I moved things. I stopped using my Yahoo calendar, I moved my emails to Gmail, and consolidated my activities to Google. I still use Yahoo only for instant messaging, but that's about it. Google is awesome.

Now, I guess I should ask Google for some money since I basically wrote this awesome post about their awesome product. 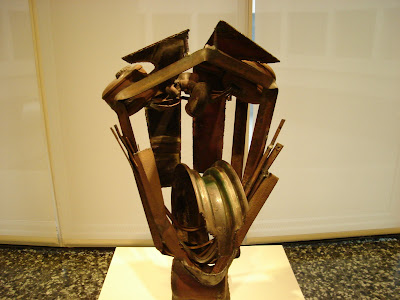 (Recycled, from my Hirschhorn Museum Series)