What is the Color of Your Bra?

These past few days, I have witnessed weird female behavior in cyberspace, namely, in Facebook. Starting last Thursday, I saw some of my female friends putting colors as their status updates, such as white or electric blue and I so I thought, what was that about? In fact, one responded saffron and so I thought, she must be cooking.

Anyway, it turned out that more and more of my female friends have been doing it, to the point that I saw one along the lines of pink with violet dots and another being beige with lace. So I decided to look it up.

Apparently, the latest meme was that females should post the color of their bra, just that, in their status update. The males should not know about it, and apparently, the intention was to make people aware of breast cancer.

Whoa, really? How does that make people aware of breast cancer? At first, I thought, heh, that's a fun meme, it's cute, it makes people think. It did make me giggle, once I figured the whole thing out.

But then, weird things happen. Some of my guy friends started copying the trend, and so every now and then, you'll see a guy with a status such as blue and you'll think, Really? You wear them too? Not that I find that wrong, but sometimes it clashes with what you know with that person and it causes some sort of cognitive dissonance.

But perhaps the most disturbing thing is if you see your mother post her bra color in Facebook. There's a reason why no matter how normal sex is, all of us seem to be grossed out by the idea of our parents' having sex. I cannot explain that, but that seems to be the trend. And somehow, knowing your mother's bra color falls along those categories.

So yeah, that was the latest Facebook meme. Was it fun? Well, it depends on how you define fun. Did it accomplish what it needed to accomplish? I don't know. Judging from the articles you see online about the reactions of people, it didn't seem to make people more aware of breast cancer. In my opinion, all it made me aware of was that my female friends wear very interesting bra colors. It didn't provide any informative material about breast cancer and prevention, all it did was provide fodder for the sometimes promiscuous imagination. 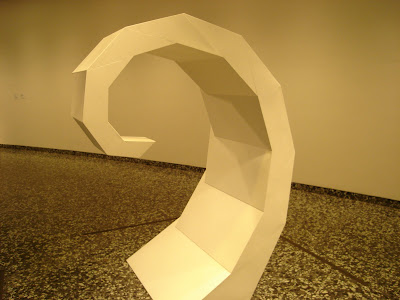 (Curl, from my Hirschhorn Museum Series)