The other day, I was doing some reading that didn't require too much brain effort. So I had the Internet radio on, and it was playing James Blunt's Goodbye My Lover. I tuned in, and figured that the chord progression was so simple, I could possibly learn it in a few tries.

So I tried looking for the sheet music online, and sure enough, there was a copy somewhere. I printed it late one night, and then went to the practice room in the Music Department. Fortunately, no one was there. So I sat down and worked on it.

Wow. It was relatively easy. The thing with this song is that the huge impact lies on the words, and the musical background is just feebly aural. The chord progression was simple, it was just E-C#m-A-B, and sometimes it becomes E-C#m-G#m-B, but it always was that four-step sequence.

So I was thinking, wow, one can get paid big bucks with just these four chords? But I have to say, non-classical music usually gets the audience with the words, and yeah, with a rather minimalist musical structure like that, it's the words that drives the song forward. 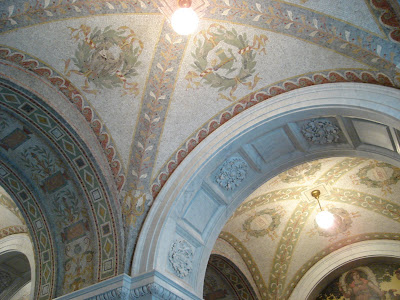 (Inside Arch, from my Library of Congress Series)