Giving up the Elevator for Lent

This past week, I decided to get back at the exercise routine and refuse to use the weather as an excuse not to go to the gym regularly. I also decided to refuse to use the fact that my former gym buddy finally declared that she is not a morning person at all and therefore does not have the desire to come with me to the gym first thing in the morning (hence the former).

So starting last week, I rearranged my schedule so that I can go to the gym first thing in the morning, just after waking up and even before eating breakfast, as this seems to be the time slot that works best for me.

The thing is, the gym I go to is in campus, in the north campus. I live near the south campus. Thus, there's serious planning involved if I want to stop being like Jared Leto in Chapter 27.

Working out in an empty gym is actually awesome, one doesn't compete with other people on the machines, and the jogging track, which I am fond of, is clear of other runners.

So, after exerting physical effort for about an hour, I head back home, ride the bus going back to south, walk home, eat breakfast, shower, and then head back to north for the day.

I also stopped using the elevator. My friends told me that I gave up the elevator for Lent, which is a funny concept invented by the Catholics I guess. But given that my office is located on the sixth floor, there's quite a few flights of stairs that I negotiate up and down every day.

Which brings the fact that for the first few days, my legs were sore I felt like I rode a mechanical bull for the whole afternoon. But hopefully, it'll be fine later, as I need the endurance to hike that Annapurna Circuit, or climb Mount Kinabalu.

And finally, since I begin my day early, I also end it early. By 9:00 PM, chances are I am already asleep. 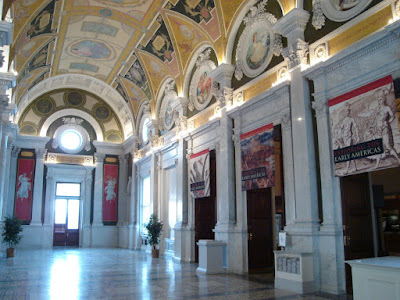 (Exhibits, from my Library of Congress Series)