The other day, I was in the bus heading home, and I witnessed something disturbing.

There were sixteen girls in the bus, all college students. And practically, they dominated the whole bus, they were the only ones talking, in the middle of the night, while everyone was trying to wind down and rest. Therefore, one can hear what they were up to that night.

Apparently, they were heading to a sorority house, and it's their first night pledging. And so after hearing what they were up to, I couldn't help but think how pathetic they were.

I was like, wow, this is groupthink par excellance. I wonder why people feel the need to join groups like fraternities and sororities, where one undergoes these initiation rites to fit in, to join a group, a secret society. Is it the case that one cannot stand alone in this world, that they are willing to be submitted to all this humiliation just in order to fit in and stand as a group? I don't get it.

It's like surrendering your own body and soul to a group entity. I overheard one girl telling her boyfriend over the phone that she cannot talk to him for the next two weeks, even over the phone, because she was pledging. Because that was a requirement for the sorority, and she kept explaining to her boyfriend and apparently the boyfriend wasn't too happy about it, and so some other girl in the group even told this girl who had the phone to give the phone to her so that she could explain it.

Then, they did a countdown roll-call sort of thing, they practiced that while in the bus a few times. Then they called some other girls and told them to wait for them in the bus stop so that they could walk together once the bus stops at the end of the line.

What makes people surrender their individual control of their person and let a social construct guide their actions like that? What constraint ranks so high as to allow a group dictate one's movements? I am no sociologist, so I do not know the right answer to this, but nevertheless, I am disturbed that there are people who would be willing to go to great lengths just to pursue group solidarity. The thought is somehow scary. 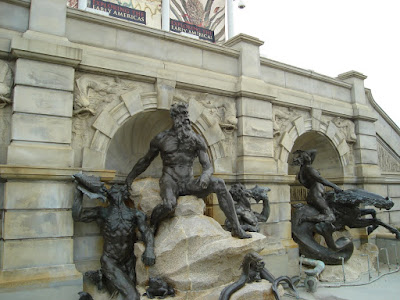 (Poseidon Fountain, from my Library of Congress Series)