How to do Science

The other day, we were in the lab working on setting up the new experiment we had. We were proof-reading things, making sure that there are no bugs in the program, so that when we load it in the lab and have participants over, there would be no problems.

Then I realized that with this one project that I am involved with, it has been a long ride. I guess that's just how one does science.

The thing is, this all started when we came upon a paper in which we didn't believe the results. So we decided to replicate the study. We also had ideas on how the study can be improved, so that would be our next step. However, since we thought that there were confounds on the original study, we decided to replicate the study after eliminating the confounds that we think they have.

So we wrote new materials. We also got a little summer grant research money. We then normed materials so that the confounds would not be there anymore. We equated likelihood and plausibility of scenario. We normed for other stuff, so that there would not be a reason that the difference in reaction time that we would observe is due to something aside from what we were manipulating.

By November 2009, we were done with norming, but alas, we found out that some of the experimental items had to be dropped because they did not pass norming. Thus, we had to write some more and norm them again.

By January 2010, we had enough experimental items. Then we had to focus on the distractor items that we will be using. We used a design where there is a 3:1 filler:test item ratio. Thus, for every experimental item, there are three filler items, and this is done so that the people will not be able to strategize and learn whatever it is that we are testing. We want them to be unaware as possible with respect to the construction that we are testing.

So after norming, and all the other considerations, we are running the full replication experiment without the confounds starting this coming week: March 2010. It's almost a full year.

Wow. Doing science takes time. But honestly, I love every minute of it. 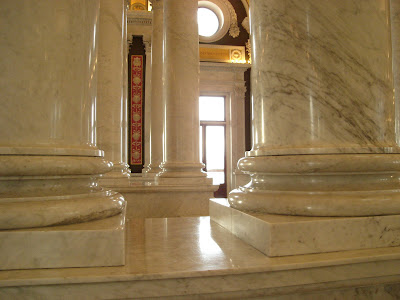 (Marble Chunks, from my Library of Congress Series)