Two days ago, there was a shooting scare on campus. Someone allegedly saw a gunman enter Lockwood Library with a rifle.

Thus, in that afternoon, tons of policemen surged to the library, and evacuated the building. We all got email messages that the library was evacuated, and an hour later, all classes were canceled for the rest of the evening.

It later turned out that the library was secure, and there was no sign of the gunman whatsoever.

This was a couple of days after the University of Alabama in Huntsville shooting, where there was one professor who allegedly shot three of her colleagues because the university was denying her tenure.

I actually was acting stupid that afternoon, during the shooting scare. It wasn't until my classmate who had an office next to me who would not leave until I pack my bags and leave as well that I decided to leave campus and go home. My first idea was that if there was indeed a shooter, then I would be safe cocooning myself in the office. 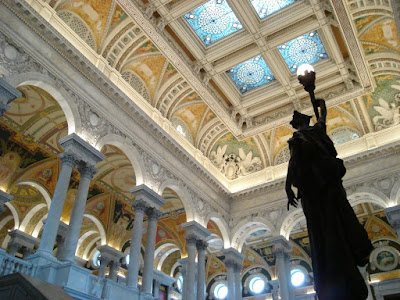 (Statue and the Ceiling, from my Library of Congress Series)