Living here in Buffalo, which has a large foreign population due to the large research university here, has provided me with occasions to reflect on the various ethnic cuisines that the foreign population thrive in. When the Chinese invite me for their parties, I love their pot stickers and noodles; I love the way the Indians make their curries; and I also like the Filipino fare that the small Filipino student population in the Department of Chemistry here provide me with from time to time.

So sometimes, people tell me that I should cook Filipino food for them some time. But the thing is, I don't know any Filipino food, except for the ubiquitous chicken simmered in soy sauce and vinegar. I realized that I can cook tons of other ethnic cuisines (heck, I even tried some Senegalese peanut stew once and loved it), but not Filipino.

Oh well. So for today, as always, I decided to make something that mixes several threads of ethnic cooking from different continents. And I figured, if it turned well, then I might as well post it here. If not, then nobody needs to know about how it turned. Again, I love cooking than baking, for this exact reason, that I can be cavalier about it. And I suppose since I am still blabbering about it, it turned out well.

So, without further ado, here's the recipe for Spinach and Couscous with Cultural Identity Crisis. I am sure you can figure out the two main ethnic traditions that this dish borrows from. 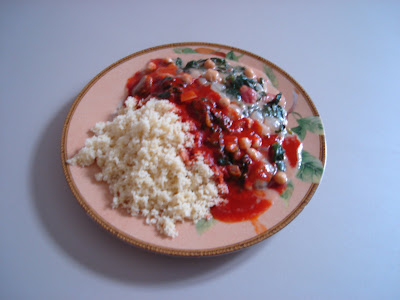 1. Heat the vegetable oil in a deep pot. Saute the onion, tomatoes and mushrooms until tender and golden, about 10 minutes. Put the spinach in the pot in batches, until they all wilt. Add 1/4 cup water. Put the salt, pepper, and diced habanero peppers (be careful when handling the habanero peppers: some varieties will need you using gloves). Simmer for 10 minutes.

2. While simmering, heat the enchilada sauce. Put aside.

3. Still while simmering, put 1 cup water in a small saucepan and let it boil. Once it boils, put the couscous and remove from heat immediately. Let stand for 5 minutes. Fluff with fork. Do not put anything else in the couscous, as the spinach will have more than enough flavor you will need.

4. Before serving, pour the shredded cheese in the spinach mixture, until they are all melted. Remove from heat. Serve on a plate, and pour the heated enchilada sauce over the spinach.

So there, that's it. That was the product of my imagination while in the supermarket the other day. If you decide to make this, and think that it needed improvement, by all means, let me know. I would like to know how people optimized it. 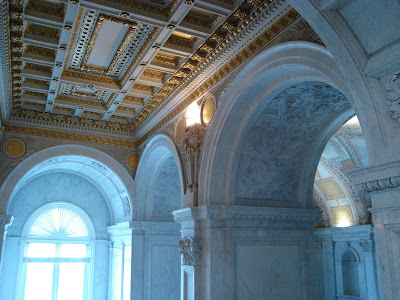 (Ornate Ceiling, from my Library of Congress Series)