So, I was watching a couple of episodes of the current Amazing Race season. And I cannot tire of being amazed at how people act when under pressure.

First, people get dehydrated. I suppose that's a natural occurrence, when you are in a hectic pace and you just have one goal in mind, to reach the finish line. And you forget to drink, and so you have to get to a hospital and get an IV drip.

Then, people sometimes resort to faith in order to accomplish tasks. There was a team who needed to lasso a decoy bull in order to get the next clue. They had to do a cowboy type maneuver in roping the bull, and then pulling it. The team cannot perform it for the longest time, so the person doing it decided to tell her teammate to pray for her. And so the other teammate did, and guess what? It worked. They were able to lasso the thing. They shouted Jeeeeessssssuuuuuusssss!

And then people just stop being logical. They throw temper tantrums, they don't read the clues, and they just start acting stupid.

And what is it with Miss Teen South Carolina always worrying about whether everyone in the whole wide world still thinks she is stupid? If she is really worried, then start acting like you aren't dumb!

Somehow, this season doesn't give me a good I am rooting for this team! feeling. But perhaps that is the goal of the current season, to make it so unpredictable by having all these teams that are so heterogeneous that none stands out as a sure win. 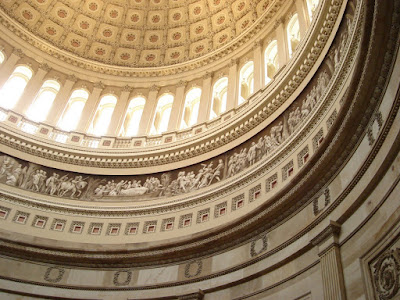 (Details, from my Capitol Hill Series)