Linguistics Departments usually are smaller than your typical college department. It isn't as big as English, or Chemistry, where there are several faculty members and not everybody knows everybody. At times, in smaller universities, linguists are not even in their own department, instead, they are affiliated with the English Department, the Romance Department, or what not.

My department is of a fair size, we have about 14 faculty members who are tenured or tenure-track. And yet, I still am amazed at the diversity of the academic interests within the department.

So, what I am about to say next is just pure observation, this is not based from any hard facts whatsoever. Who knows, I might be wrong at times.

Anyway, I see three camps in which the faculty members and the graduate students are aligned. There is the jungle camp, the lab camp, and the theory camp. And depending on where you are aligned, the things you do, even to the most minute things, such as how to cite people in your papers, will differ.

So, let's start with the theory camp. People from the theory camp gather their data without going to the jungle or to the lab. They theorize instead. In a way, they gather their data for free. Thus, this is the easiest camp to be in if it is data-gathering that we're talking about. However, these are also the most intense people, as they know their theories in and out, and they can manipulate them to the most painful degree. At times, however, one can wonder how it is relevant to the larger picture. But hey, someone has to do it.

Theory campers write papers usually by themselves. Collaboration is existent, but solo work is more prized. They use the citation manual as dictated by the Linguistic Society of America. This means that in the bibliography, one uses small caps.

Next is the jungle camp. People from the jungle camp usually disappear in the summer, sometimes, for even longer times. This is because they go to the jungle to gather data. They value fieldwork and interface well with anthropology. They document languages that are almost dying, and they describe languages that haven't been described before. Dissertations written by jungle campers usually are enormously long, averaging around 400 pages. This is due to the immense quantity of the appendix that is attached, which is basically almost all the data that have been collected in the jungle. They also are familiar with all the vaccines that one needs to go, so check their upper arms and there might be traces of shots of yellow fever, malaria, hepatitis, and other vaccines.

Jungle campers also have the tendency to publish solo. Mature jungle campers have published books of grammars of the languages that they have described, and usually they hang on to their jungle for the rest of their career. Sometimes, they go native by marrying one of the members of their population of interest.

Finally, there's the lab campers. I belong to this camp. Lab campers do not disappear in the summer, but they disappear for hours every day sometimes. This is because they have a cave in the campus, which is their lab. They usually care more about the data, not the person. They interact with hundreds and thousands of people just in order to measure weird things, such as how fast people read a certain word, or to know what the shape of a specific brain wave is given a word. Lab campers also like graphs and pictures, and are intimate with math and statistics. Sometimes, lab campers can over-generalize though and apply statistics to real-life, which may have disastrous results. And speaking of pictures, they like to take pictures of weird things, such as the inside of your head.

Publishing is different in lab campers. Collaboration is the norm, and papers usually have more than one author. Lab campers can be very picky at times when it comes to who gets to be the first author or not of a certain publication. It is not surprising to see a paper with four different authors. And lab campers use the citation manual provided by the American Psychological Association, which means that only the first letter of the first word in a title is capitalized, unless there is a colon in the title, and so forth. Dissertations by lab campers usually are short, averaging around 150 pages.

So, even though this is clearly satirical in nature, I hope I have demonstrated that Linguistics, even though it may be a small department compared to other departments in the university, is a very diverse field, and because of that, it can create tension in some cases, but I am happy to say that in my case here, we are one big happy bunch. 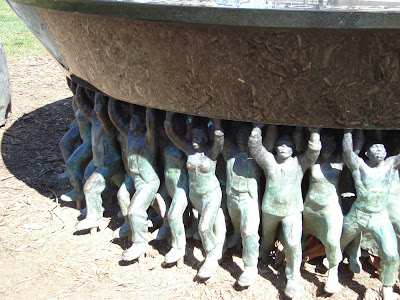 (Table Detail, from my University of North Carolina at Chapel Hill Series)