The last week, I inadvertently started a discussion on religious attitudes in cyberspace. Due to the fact that it was Easter Weekend, religion was in the air. Plenty of churches in Buffalo have signs announcing messages of a celebratory nature, about how they are celebrating the fact that Christ has risen from the dead. Add to that, in a social network that I belong to, plenty of my friends have status updates that celebrate their faith, telling the world how much they are happy that Christ has risen to save them, and other Biblical quotes announcing the world their passion for the Christian faith.

That made me think. Plenty of people put religious status updates during a religious event. Of course, one puts these status updates in order for other people to see. And of course, I presume that most people would assume that not everyone agrees with their religious beliefs. I for one, do not. Thus, what do I do? I simply ignore them. I see a friend announce his faith, and others click the "I Like" button. But I just let it be.

On Friday, I conducted a social experiment. For my status update, I posted a quote from Nietzsche's Also sprach Zarathustra. I posted the first three sentences of the Madman quote: God is dead. God remains dead. And we killed him. This was Nietzsche's observation that humans have shifted from a religious worldview to a secular one. Back in the Middle Ages, religion and God was taken to be the supreme explanation for all world phenomena: solar eclipses were associated with bad omens, plenty of social norms were constructed based on Biblical and other religious principles, excommunication was a very strong social persuasive element. Now, that is not the case anymore, at least in most parts of the world. Reason for the most part has had a broader role in society.

That, however, is not totally true. In the United States, there still is a day designated to be the National day of Prayer. Religious holidays still permeate social norms.

But, Nietzsche was right in the fact that the role of religion and God has ebbed compared to several hundred years ago. We do not rely on religion to govern our daily lives. And thus, according to Nietzsche, humans have killed God. Humans now have other sources of devotion.

That was the background of the Nietzsche quote that I posted as my status update for last Friday. And status updates are broadcast as a news feed to the friends I have in cyberspace. My friends have the option of seeing it, and if they choose to, they can click "Like" signifying that they like the post, or they can add their own comment to it.

So, I wondered what reaction I would get if I posted the Nietzsche quote. And sure enough, within the hour, I got a response. It said, "Unlike. This is so untrue."

So, I started dissecting it. There is this issue of free speech. Yes, people are free to put whatever status update they have. Christians can do it, non-Christians can do it. Muslims can do it. Free speech also constitutes replying to these. If people dislike another person's status update, the person is free to tell the other person that they dislike it. Thus, I do not mind it if someone actually told me that they disliked my status.

But, the fact that they told me that they dislike my status and that I told an untruth irked me. If I were a Christian and posted a Christian message celebrating my faith, a person disagreeing with me probably would have just left me alone. On the other hand, an atheist message that contradicts the Christian faith was an easy target for a complaint. Thus, I had no choice but to defend my stance. If someone told me that I was a liar by saying an untruth, then I had to say something back.

I wonder what religious people would think if every time I see someone post a status update of a religious nature, I respond by saying "Unlike. This is so untrue." I probably would get a complaint about religious intolerance. But if religious people benefit in freedom of religion, I think it is proper courtesy to extend the freedom to secular people as well. I will let you believe whatever you want to believe, so let me believe in whatever I want to believe as well. Don't have an asymmetrical double-standard.

I am not for proselytizing at all. There seems to be something fundamentally wrong if everyone who believes in a religion think that they are right and the rest are wrong. I think everyone has to come to terms with one's own spiritual journey. Everyone should find out for oneself whether they believe in God or not, and if so, what kind of God. Because that is the only way that one can fully be convinced of one's beliefs. Regardless of one's religion, most of us here in this planet just adapt the religion of one's parents. And religion becomes less and less religion and more and more tradition. One was raised in a certain manner and therefore one just follows that. But does the person really believe what they claim to believe? Most of the time, they just end up like a trained parrot.

So, in conclusion of my inadvertently conducted social experiment, I found out that the world is still biased toward Christian and religious attitudes. This doesn't exist only in the Christian world. One must not forget Theo van Gogh, Ayaan Hirsi Ali, and Salman Rushdie. And the sad thing is, some people had their lives taken away just because they didn't agree with the beliefs of others. 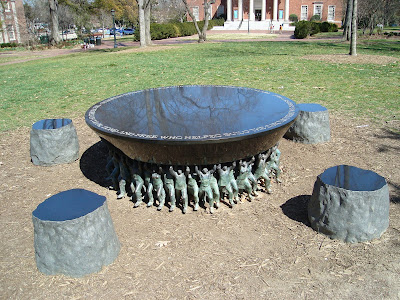 (Table and Little Men, from my University of North Carolina at Chapel Hill Series)