Yesterday, I attended a concert offered by the UB Department of Music. It was one of their faculty recital series, and yesterday night, Tony Arnold, who is a soprano, together with Alexander Hurd, who is a baritone, accompanied by Alison d'Amato, were singing. They sang a song cycle I haven't heard before, because it was the forgotten music of Marcel Tyberg. And this is one of those concerts in which students can get in for free. So I figured, why not.

The night was opened by JoAnn Falletta, who is the resident conductor of the Buffalo Philharmonic Orchestra. It was funny seeing her up close (I was sitting in the third row) as whenever I see her conduct the BPO, I sit near the back of Kleinhans Music Hall (as that is where the student tickets are located). I never realized she was a petite woman.

Anyway, this is part of a project where musicians are premiering the music of Marcel Tyberg, who is a not-so-known composer who was killed by the Gestapo. For last night, they premiered his song cycle from Heinrich Heine's Lyrischen Intermezzo.

I never attended a vocal recital before, and so I didn't know what to expect. I liked the whole concert though. For starters, the audience didn't clap at the end of every song. That shows that they know performance tradition. I also think that I was the youngest member of the audience that night, as most of the people in there are retired and senior citizens. It was weird being in a room full of mature people.

Anyway, the music was amazing, and I liked the balance between the musical activity in the voices and the piano accompaniment. I was amazed at how the singers conveyed their emotions by the way they sing, and even though there were English translations to the German libretto, I think that even without the translations, the singers perfectly conveyed the emotions that the music had.

All in all, it was a very wonderful evening, and I am glad that I went. 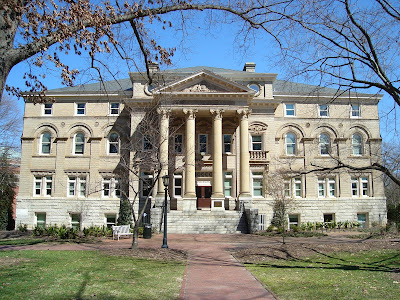 (Alumni Building, from my University of North Carolina at Chapel Hill Series)