For the past two years, there was a character in my social sphere that I found very hard to deal with. Let me just call this character Pat, following guidelines by the Linguistic Society of America to use gender-neutral names.

My interaction with Pat began sometime in the summer of 2008. I was contacted by Pat through email, asking questions about the graduate program here. And since I was sort of in the position to give the answers to these questions, I did my duty and replied, even though I was out of town, I was actually somewhere in rural Peru backpacking when I got the email.

Anyway, the thing was that I was somehow struck by the fact that this email exchange seemed to be suggesting that Pat was a highly intelligent and interesting person. Thus, given that presumed data point, I figured that it would be a possibly good idea to get to know this character more.

Fast forward to three months later, the beginning of the semester, around August 2008. Pat arrived, and from a distance, Pat looked like a rather intelligent and interesting person, however the moment Pat opened up his/her mouth, my rating of him/her immediately went down. It was so cognitively dissonant, that I somehow shocked myself at realizing how I suck at reading people.

So I somehow found myself in classes in which Pat was also a student. We took classes together, and it was always interesting to see how Pat interacted with other students, and how he/she behaved him/herself in class. I suppose my biggest problem was that I found Pat's behavior annoying, due to the fact that Pat didn't know how to be a good citizen. Pat also seemed to not know how to read people as well. But, unlike me, who doesn't know how to read people due to the fact that the cues I gather from people are usually interpreted wrongly, for Pat, it seems that he/she doesn't even give effort to read people. I try, Pat doesn't even care. In short, I find Pat rather obtuse.

So, I eventually concluded that I wanted nothing to do with Pat. I don't want to be friends with Pat, I don't want to talk to Pat. I removed Pat from the list of people I interact with both in real-time and in cyberspace.

For the next two years, that was my strategy. I always believed in the shared information theory: I can rank people from 1 to 10 in which the amount of information about me that I share to these people is highly correlated to the degree of how close they are to me. Thus, strangers are 1, and my best friend is around 8. 10 is reserved for the closest person I will have, and right now, that spot is empty and no one seemed to be working to that direction. Anyway, after further thought and evaluation, I realized that Pat would fall off this scale. Pat would be a zero.

That was the last two years.

And last week, the last week of classes, something happened. With the help of the ninja, I realized something. At this point, I already defended my dissertation proposal. Before the defense, Pat wished me good luck, while I could care less. I always thought, why, why do you really want to talk to me, can't you talk to someone else? Just please please please leave me alone. Thank you very much. And yet Pat doesn't get the picture. So I was minimally polite.

A couple of days after the defense, Pat wanted to know how it went. I answered minimally, but apparently, it was obvious to other people that I had some discomfort with the interaction. I mean, Pat was a zero in my scale, that means that I don't want to part away with information pertaining about me, thus, Pat asking me what my working title was meant violating this constraint.

Anyway, my best friend put things into perspective. I suppose I never understood how Pat functions, and the ninja explained things the way Pat would see it. And things somehow made sense.

So, in short, I realized I needed closure. I realized that it was just taking my energy and making my blood pressure rise whenever I try to barricade myself from Pat every time I see him/her. So, the other day, when there was a social gathering in which both of us were invited, I decided to be polite and sociable. Apparently, Pat would be having a career change, and thus, moving out of the area. I suppose it was just proper human behavior to be civil and make peace. 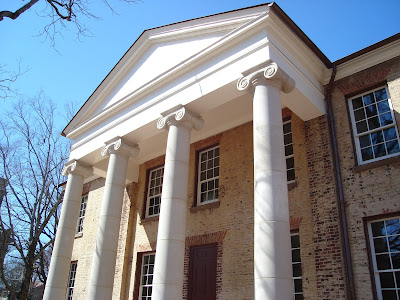 (Pillars, from my University of North Carolina at Chapel Hill Series)