Lately, I have been rediscovering old music that I liked in the past. Thus, in my Internet radio account, I added two albums by bands that I listened in the past and liked. I added Page Avenue by Story of the Year and Dead Letters by The Rasmus.

I remember these two bands being given airtime back in 2003 and 2004. I remember seeing the music videos in MTV. And somehow, I just remembered that these bands exist, so I added their music to my account.

The funny thing is, I believe that my musical tastes have started to solidify. It used to be the case that I would listen to the radio and the music that I like usually is the Top 40. I would usually like the music that is currently being played in the airwaves. That was when I was still growing up. That was when I was still a teen. And I remember not understanding my parents when they liked Frank Sinatra and Nat King Cole, Simon and Garfunkel and all those oldies. I didn't understand why their musical tastes seem to have been stuck in the past.

But now I realize that my musical tastes seem to have been stuck as well. I still like the Cranberries, even though they were most popular back in the 90s. But nowadays, the current teen population may not even know who Dolores O'Riordan and her band is. Yes, I still like current music, but not all. I don't like the types of Lady Gaga and other similar acts. There are still music that I like, but I find myself liking more and more bands that had their heyday back in the past.

This means one thing, that I am getting old. 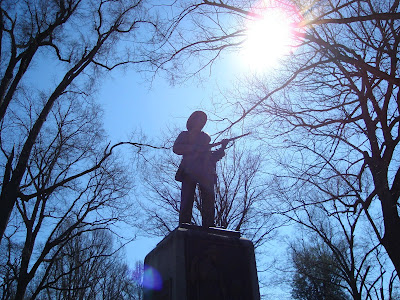 (Human Statue, from my University of North Carolina at Chapel Hill Series)