Today, I attended the last concert of the 2009-2010 season of the university's symphony orchestra. My friend was also playing, so that was a cool thing too.

Anyway, for today's program, they assembled a series of pieces that were written by Russian composers. They did the overture by Glinka, a piece by Borodin, and or course, Ravel's orchestration of Pictures at an Exhibition by Modest Mussorgsky. They also performed the first movement of a Mozart piano concerto, due to the fact that the soloist won the concerto competition that was held by the music department.

I like the fact that the orchestra has matured in a sense that it is tackling bigger and more intense pieces than before. The bad thing about university symphony orchestras is that the members eventually leave. They stay in for about 4 years, they become good at what they do, and then they graduate and leave. Oh well, that's how this game goes.

I did not like the piano concerto at all. Granted, I am not a big fan of Mozart and his work, I am not a big fan of the runs and the scales that his work prominently features. However, given that, I still did not like the performance of the piece. It was supposed to be a piano concerto, and yet the piano did not appear like a solo instrument at all. Yes, the pianist had all the notes right. She was brilliant in her technique. All the notes were correct, and her scales and finger work were superbly clean. But she was very much lacking in force. I observed the conductor persistently trying to quiet down the rest of the orchestra, to compensate for the lack of energy that the piano was supposed to have. I wanted more forte, more force in the piano, after all, this was a concerto, with the piano as a solo instrument, and yet she was playing as if she was on equal footing with the rest of the group.

The other pieces were performed well. Okay, I suppose. Pictures was a dramatic piece, and it required superb technique with the various instruments that had a solo in it. There were a few times in which the soloists were hitting wrong notes, and I could just squirm due to the fact that I am familiar with this work, and something sounded unexpected. 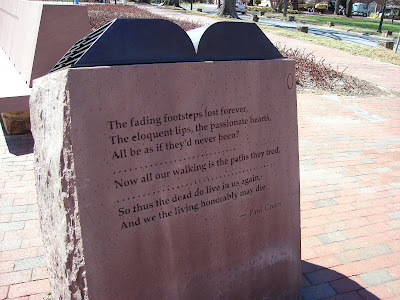 (Paul Green, from my University of North Carolina at Chapel Hill Series)