I am heading back to the Philippines in 30-some days. I can't believe that it is coming quick.

Before that, there are several things that I need to attend to. I suppose the biggest agenda I have in coming back is to renew my visa. And in order to do that, I need to accomplish several things. I already bought an appointment slot, so I just need to finish entering my personal information. I need to accomplish three forms, so I'll do that soon. I already processed my I-20 forms from the school, so that is done too. Once I finish the three forms for the visa application, all I need is to go back to the Philippines and pay the visa fee in a bank there.

My adviser is back in town. I just sent him an email to remind him to schedule the defense. It will be next week, if not, it will be the week after that, during the exam week.

Once the defense is over, that means I need to sit down and work. Primarily, this means devising stimuli so that I can actually load this in the lab. Thus, I will be spending my summer writing stories and sentences for my participants to read. Thus, I declined a lecture opportunity from my undergraduate alma mater as I need to focus on my work for the time being. Like I said earlier, some people are already asking me results of the things I am testing. Thus, one needs to put things in the lab.

I am somehow excited to head back, after all, I haven't been there for 3 years. I have a few friends that I want to see and catch up with. That would be interesting. Some people I have hung out in high school, some on the other hand are old friends from college.

What else is changing this summer? Well, one of my roommates is leaving, as he is graduating. Thus, we need to find a new roommate for next year. Hopefully, this is the last year I am living in the apartment, and after next year, I will be moving some place else, maybe here in the United States, maybe in some other country, who knows. I don't really know, but I don't care at this point.

Another thing that I want to do while I am in the Philippines is to explore the country for a little bit. I don't know whether I will have the time to do it, as I predict that I will be busy while I am there with my work, but I would like to remedy the fact that I have been a tourist in several other countries and yet my home country is relatively untouched by my feet and camera. Heck, I haven't even explored the Old Town (Intramuros) of Manila. How silly is that? Thus, I think I'll bring my camera and take it for a spin. It's time to discover one's roots.

Oh well, in other small preparatory events, I already selected my seat assignments for the flights I will be flying in. I will be earning miles again, yeah! Hopefully, I get enough miles so that by next year, I would have enough miles to head to Palo Alto, California, in March, as Stanford University is hosting next year's primary conference on language processing (the same series that I attended in New York City last month and in Chapel Hill, North Carolina two years ago). Hopefully, by December (the month when abstracts are due), I have results to present to the academic community. After all, I already have one other reason to go, as someone I know who isn't based in Buffalo but attends the same conferences as I do owes me coffee. 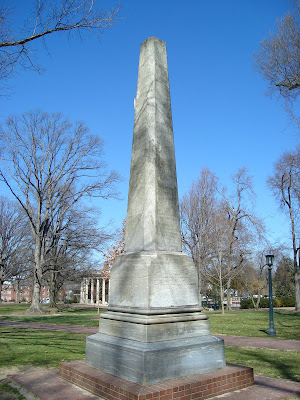 (Concrete Pole, from my University of North Carolina at Chapel Hill Series)