Last Friday, I attended the concert of the university's Percussion Ensemble, led by Tom Kolor. And once again, I was impressed.

For the night's program, they played four pieces all by Steve Reich, a composer that until then I have never heard of before. And sure enough, I was surprised.

The first piece was called Clapping Music, and as the title suggests, this is nothing but clapping. There were two musicians, and they just clapped and clapped, but the rhythm was the big thing here. They clapped first in unison, but the rhythm got complicated, and I was just amazed how they could still follow oneself and the other person, and the piece ended in unison.

The second piece was called Marimba Phase, which can also be played using the piano. This was composed back in 1967, where there are two marimbas playing in unison, the same motif, but then one of them goes a little faster, thus creating an echo, and then the play at the same speed again, but due to the fact that one played a little faster earlier, it feels like the music is just vibrating in an echo fashion. Again, an amazing piece.

The third piece was called Music for Pieces of Wood, which consisted of five musicians banging different wooden pieces tuned differently. Again, this makes use of complicated rhythms.

The final piece for the night was the biggest one, called Music for Mallet Instruments, Voices, and Organ, written in 1973. There's 4 marimbas, 2 xylophones, 1 vibraphone, 1 organ, and a woman's voice. And yes, the woman's voice was used as a percussive instrument as well, as all she sang were vocalizations, with lyrics such as ee-ee-ee-ee-eee and too-roo-roo, too-roo-roo, a-cha, a-cha, a-cha, acha, and so on.

In the end, I felt like I discovered music I haven't heard before, and I loved it. The only thing I could possibly change was to bar those two guys up front in the first row who apparently didn't know recital behavior, as they were talking for a part of the concert, and the whole audience could hear them. 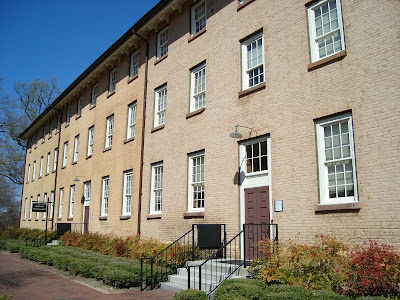 (Old East, from my University of North Carolina at Chapel Hill Series)