Yesterday, I was just made aware of a legal case that ended up in a favorable outcome for religious freedom. It was about the settlement in Lown v. The Salvation Army, which apparently was concluded a couple of months ago, but I only read about it yesterday when my ACLU newsletter arrived.

So what is this about? Apparently, until now, The Salvation Army required its employees to disclose their religious views, reveal the frequency of their church attendance, and submit the names of their ministers. They were also required to sign contracts that bind them to "preach the gospel of Jesus Christ." And after some deliberation, the case ended in a settlement, and The Salvation Army surrendered. You can read more about the settlement decision here and here.

While I am not against the teachings of The Salvation Army, I am against the fact that they are exploiting vulnerable populations to propagate religious teachings. They perform one of the largest social work efforts for the needy, and for that they are effectively exchanging their social services for religious entrapment.

See, the thing is, I find it hard to comprehend why people cannot just let other people be when it comes to issues like religion. Religious freedom comes in two flavors, and both are necessary. First, religious freedom means that a person has the freedom to believe in whatever form of god he or she chooses, instead of being dictated by the state. That is why I do not favor state-dictated religions. Most of the time, we think of religious freedom as being opposed to a situation in which the state permits no existence of religion whatsoever. Thus, there are countries which imprison their citizens for practicing a certain religion.

However, religious freedom also come in the form of irreligion. Having religious freedom means that a person can opt to not practice a form of religion if he or she chooses, and that this decision should not be a basis for being withheld certain services such as the ones given by The Salvation Army.

The Salvation Army is commendable for their efforts in addressing the social needs of certain members of our society. These people may need their physical needs addressed, yes, but that does not license The Salvation Army to entrap them religiously. Only their lives need saving, leave their souls alone. 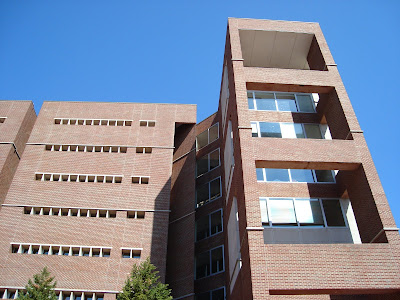 (Interesting Architecture, from my University of North Carolina at Chapel Hill Series)