Last Saturday, a friend of mine and I went to see a concert of the band Apocalyptica. And given the fact that this was the first time I am actually seeing a concert that is not classical music, I kinda didn't know what to expect.

So, this gig was to be held in a concert venue called the Town Ballroom. It's not a big place, perhaps it accommodates up to around 600 people, so it is more intimate than those massive rock concert venues that people usually see. My friend and I had a couple of beers before, and we chatted, caught up, and things like that. After that, we rode the metro and walked to the venue.

The doors opened at 8:00 PM, but we were there about an hour earlier. A lot of the people were wearing black outfits: after all, this is a metal concert, who what else would you wear? I guess I was one of the few people who was actually wearing something that wasn't black: I was wearing a red shirt. There were people who went to the extreme: they had on elaborate costumes and wigs and all that, totally gothic.

They checked our ages, and if you're under 21, you get a black X on your fists, and if you're over 21, then you get a yellow band on one of your wrists. That allows you to get something alcoholic in the bar inside.

We got our tickets in the will-call booth, and then entered the facility. It was rather intimate, and we were very close to the stage. The show started at 9:00. And for the first thirty minutes, a band called Mother Red opened for them. They were an indie band I guess, and they were good. I didn't hate them. I knew that live concerts always have opening acts like these, but I didn't know how long they last or whatnot. Anyway, they performed for 30 minutes, and after that, the crew set up the stage to make way for the guys with cellos.

At around 10:00 PM, finally, the band came to the stage. Eicca, Perttu, Paavo, and Mikko were amazingly electrifying. They knew how to keep their audiences entertained. I've heard their music before, bu I never saw it performed yet, until last Saturday. It was amazing what they could do with their cellos. I took some photos using my cameraphone, but unfortunately, they were grainy and I don't think it's worth posting it here. Here's a sample of a grainy photo. 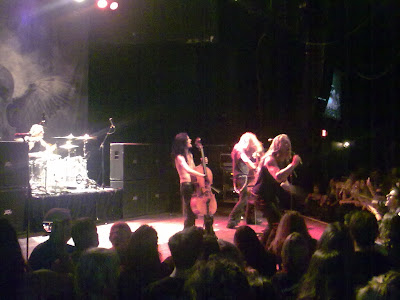 Also, when the band told them that they would be performing the last song of the night, the audience booed. I guess that was standard procedure. Because they booed and booed until the band came out again, at which point the audience cheered again, and performed several more songs. I was actually glad that they did that, because I really thought they wouldn't play a gig without playing I Don't Care. Unfortunately, Adam Gontier (who sings the song in the recorded version) wasn't there, so they had a guest singer who sang with them.

And finally, that was the first time I experienced the most bizarre experience of singing along to the crowd, and yet you don't hear yourself. So while they were playing I Don't Care, the crowd was singing along, and so did I. I knew that I was singing, because I can feel my mouth opening, and I can feel my vocal folds moving, and yet I don't hear myself. It was the most bizarre feeling.

Anyway, that was that, and I enjoyed the night. The show ended at around 11:30, at which point we rode the metro back home and called it a night. Whew! 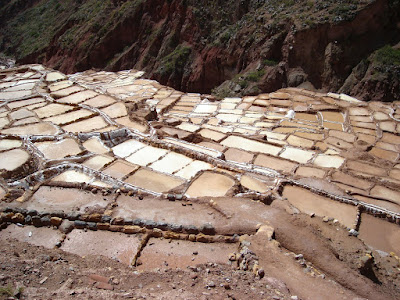 (Pools of Liquid Gold, from my Salineras de Maras Series)