Thoughts on a Lifestyle Upgrade

The other day, I helped a friend move to a new apartment. It was interesting what carrying boxes of books and big furniture can do to your brain.

So, the biggest thought I had was that I would never get a bulky furniture piece. Come to think of it, the friends I have who moved had big units of furniture, and it needed several people to move them around. I have a friend from Ohio, and he has plenty of stuff. And this other friend of mine who we helped move also had plenty of stuff.

I on the other hand, perhaps, can pack my stuff within a day, and looking at my room, I really think that I don't have plenty of stuff to move around. Honestly, if I move, there would be more things that is better thrown away than moved.

Perhaps it is because I never really saw myself as permanent here. In fact, no. Currently, my immigration status here is that I am a student: once I graduate, I need to leave. I am fine with that. So what is the point of accumulating things when I need to pack up and leave anyway, after a few years? And add to that, I don't even know where I am going to end up.

While moving, a few of my other friends and I were talking about job prospects, and where we would all end up. Some of my friends are partnered, and they were talking about how it was good that they and their partners are not doing the same thing with respect to academia. Otherwise, one's partner would be one's job competition, and that would be a bad scenario. After all, who would want to hire two linguists specializing in more or less the same thing at the same time?

I would want to try living in Europe for a couple of years at least. Which is why my current goal is to get a post-doc in Europe. I dunno, learning a new language, adapting to a new culture, while doing just research without the pressure of teaching seems to be a good thing. I actually tested the job waters in Europe a few months ago, and I got favorable results. At that point in time, someone actually was interested in me!

So when I graduate, and when I get that post-doc, I think that I am done with living with another person. I have no problems whatsoever with my current roommates, but with the lifestyle upgrade, I figure that it is time to live alone once I graduate. Hopefully, by that time, I can afford to rent a good apartment on my own.

Speaking of renting an apartment, whenever that time comes, I would opt to get collapsible and non-bulky furniture. I don't want to undergo that furniture tetris that my other friends go through, with the bulky furniture and all. See, the Japanese have perfected the art of living small, with their tatami living rooms and futon bedrooms. And they are happy with that. Americans seem to have a fascination with big furniture, with big chairs and all that. I just browsed a furniture store's website, and all they are offering with respect to sofas are these thick ones that are in one piece. In fact, I fondly remember the sofa set that we bought in Japan: it looked big, but it was collapsible into several pieces.

So yeah, that's that. Summer is here, and here I am daydreaming about furniture I would own in the future. That is not good. 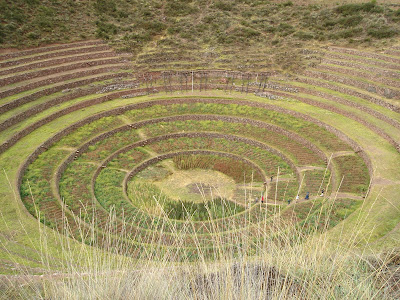 (Plantation Bowl Up Close, from my Moray Series)