I have to say, I've been to New York City so many times now, that I find it surprising that I haven't been to the Metropolitan Museum yet.

Well no, I actually have been there before, back in 2006. However, that was not a good experience. I met an old friend, and we went together, but I was basically multi-tasking, in the sense that I was conversing with my good friend, and trying to catch up, while trying to navigate the exhibits and appreciating them. Plus, I didn't have a camera, and that was the crucial thing.

Anyway, so for yesterday, my sister and I went out to do a Metropolitan Museum tour. We started with the Cloisters, the part of the Met that is near my sister's apartment. This is a small building designed like a European monastery, and they feature gardens and medieval art. I did take plenty of pictures, and I enjoyed myself as well.

After that, we had lunch, and then went downtown, and visited the main building on 5th Avenue. That basically took the whole afternoon, and I took plenty of shots. I will upload them soon, but perhaps won't be featured in this blog, due to the fact that there is a two-year backlog in pictures. I enjoyed the mummies, the Egyptian temple, the medieval art, the recreated rooms, the Buddhas, the statues of Avalokiteshvara, and so many other stuff.

There was also this bamboo installation that was on the rooftop. The original plan was to take photos of it, and then get a separate ticket to actually enter the installation. However, after seeing it, I kinda didn't see the point. So we skipped that.

Which brings me to the point of art and appreciation. There's art, and there are art critics. Now the thing with art is, that art is too subjective for me to handle sometimes, that I do not understand how the critics decide whether something is good and bad.

For me, I just trust my gut. If I see something that I like, then I like it. If I hate it, then I hate it. So when I saw the bamboo installation, I was like, blah. What's the point in climbing that thing? So I wanted to skip it.

However, what puzzled me was that there are some people who read these critic reviews, and then base their opinion on those reviews. Just because a critic said that the bamboo installation was to die for, they would all line up and see it, voicing their opinion that they so want to see it because they like it. I get the feeling that some people actually cannot form opinions of their own, and instead need the help of critics to decide whether something is to their liking or not.

I don't know, I guess I was just annoyed at some of the people in the museum, when here I am, rather provincial, as I just trust my gut in deciding whether a picture is something I like or not. 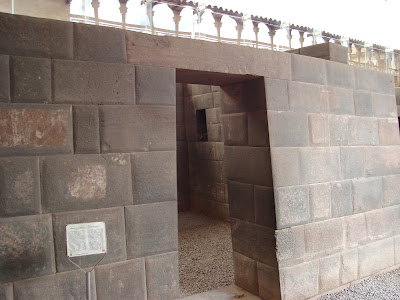 (Trapezoidal Door, from my Qorikancha Series)