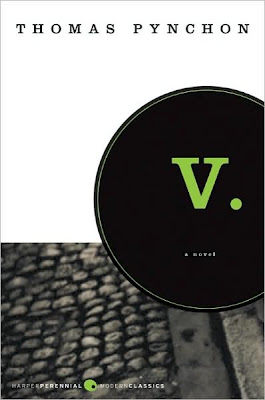 Have you ever had a time where you read something, and then after finishing it, you feel like you came out of it more confused than when you started? Well, this novel is like that. And somehow, I think I like it.

So, what is this novel about? V. (note the period) is the first novel of American novelist Thomas Pynchon, and it tells the story of two men. The first one is Stencil, who is looking for something he has lost; and Profane, who has nothing much to lose. It also has a third character, V., who is the unknown woman, or feminine entity, that appears throughout the book.

It is written in a frame narrative, and every chapter pretty much is a story of its own, and it is just loosely connected to the rest of the chapters. There are chapters that focus on Profane, who is this poor man, who is unemployed, and is living with a group of bum people, known as The Crew. He tries getting a job, and he got a job killing alligators underneath the sewers of New York City.

There are also chapters that focus on Stencil, and these chapters are always located in some part of the world where there is an international conflict going on. There's Venezuela; there's Florence and the incident in the consulate; there's Namibia (which at that time was just part of South Africa); and so on. There's always an international fiasco going on and he gets to be caught in the middle. And in these chapters, there is the appearance of a feminine entity, always with a name that starts with the letter V.

Now, V. seems to be just a reference for the collective feminine entity. Because at one point, there was a girl named Victoria, in Egypt; and in another, there was a female rat, named Veronica, who is preached to by a crazy priest; there's also the reference to an unknown country, Vheissu, which may be referring to Vesuvius the mountain or Venezuela the country; and later on, the country of Malta and its capital Valetta also appears. There's one chapter which tells the love story of V with a fellow female, who happens to be a dancer, who commits suicide in the middle of a performance.

Now, all of this just doesn't add up, but that's okay, as this is post-modern literature anyway. It's experimental literature, and the author is more interested in playing the schemata than the plot. These two men, Stencil and Profane, actually form a schematic V, as the alternating narratives about them start with the two of them very far from each other, and they converge slowly but surely as the novel progresses. In the end, there is a chapter where both of them are in focus, where Stencil takes Profane to Malta to look for V.

So did I like the book? Definitely. I have to admit that my puny little brain can only do this much to appreciating this piece, but of the things that I have seen and read, this is definitely something that will last. I actually picked this up because I read Roberto Bolaño's 2666 before, and the critics were comparing Bolaño to other great novelists of the 20th century, one of them being Pynchon. And I am glad that I picked it up. It's a difficult read, and not everything adds up, but still, one can feel that this is something to watch for and be reckoned with. I definitely will keep Pynchon under my radar, and will try to read his other books in the future. 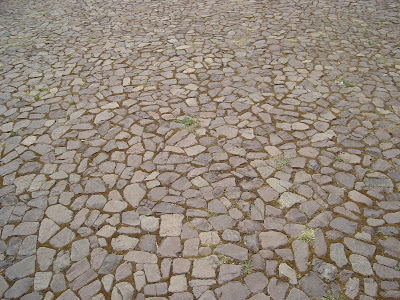 (Inca Floor, from my Qorikancha Series)