It’s funny how much information one could find out from others, simply by looking at them. Sitting here at the airport waiting area, there are plenty of folks that seem to have interesting lives, while waiting for the same flight.

There’s the couple, possibly on vacation. They have a burgundy passport, which is a high chance of being a Spanish passport, given that they speak Spanish with a ceceo, instead of a seseo. They have a guide book for New York, and they’re dressed casually. They each wear a wedding ring, so they’re married. They have matching carry-on bags.

There’s the solo Argentinian dude. I know he is Argentinian because I glanced at his dark blue passport, with a map of South America and Argentina is highlighted. He has a netbook, a big backpack, and a smaller bag. He looks like a student. And the way he does his hair, a little bit long with a ponytail, it reminds me of images of gauchos and South American cowboys.

There’s also the big family of five. The father is dressed in shorts and a T-shirt, and the mother is similar. The mother is quite big, and her breasts are sagging to her waist. The kids look excited, so this might be another one of those family vacation things.

There are several groups of elderly passengers. One of them is reading a book on her electronic device. They’re dressed pretty well, and so this might be a family visit or something similar. There’s also the two pairs of Asian couples: one actually looks like a Filipino couple, and the other one looks like an American-born Indian couple. They both have rather good English accents.

There’s the Chinese foreign student. She has a camera, and she even took a photo of the announcement board for the gate that flashed the flight information. I actually saw her I-20 as she clutched it with her passport, which made me sure that she is a student of some sort.

On the other side of the waiting area, there’s this two officers that look like they’re dressed as Immigration and Customs Enforcement people. There’s a third man, dressed in civilian clothes, which may be someone they are escorting away. It happened before, I saw the same outfit, and when we arrived in New York, there are a similar pair of officers waiting for the man.

There’s one man dressed in a suit, and a computer bag. Businessman type. A solo mom reading a book, with his blonde son, who looks like he is ready to disappear and could care less.

And then there’s me. 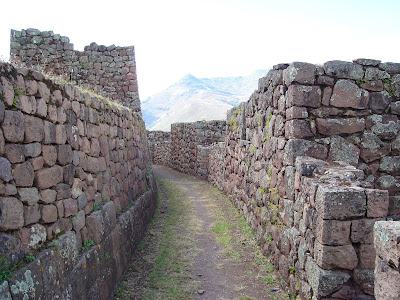 (Corridors, from my Pisac Series)