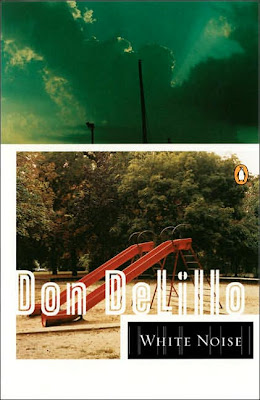 I am still in my streak of post-modern literature. And since I have talked about having the enthusiasm to read post-modern literature to my friends, one of my friends recommended this book to me. Granted, I have read a Don DeLillo novel before, and I remember not liking it. I read Cosmopolis in the past, and it was a novel that happened within a day, and it was about a guy who rode his limousine around Manhattan, then he got a haircut, and then he died. Something like that. It was weird.

But then, I might have not been in the right frame of mind to enjoy that type of novel. So I am giving DeLillo another chance. And given my previous experience with post-modern novels such as V., then I figured I would probably like this one.

So this is about the lives of a married couple who resides somewhere in the Midwest. Jack is a college professor, and Babette is a teacher. And their lives are absurd. Yes, absurd, where everything seems to not make sense at all. They have four different children from various previous marriages, and Babette is actually Jack's fifth marriage. Jack teaches Hitler studies in the college, and he has a colleague who teaches Elvis studies. Yes, it is weird. Babette on the other hand, teaches posture and other random mundane things during the evenings.

But most importantly, they both fear death. They fear the time when one of them would die, and then the other would have no idea what to do since the other one is already away. They also fear technology, to some degree, and every now and then, the novel has quotes of what the TV (who seems to be perennially on in their household) was broadcasting.

The novel is written in three parts, from the point of view of Jack. The first part was basically plot-less, and only provides a window to the daily lives and activities of Jack and his family. The second part provides a way for Jack to be aware of his death: a chemical spill happens, and he gets exposed, and so his doctors tell him that he will die someday. The third part provides competition: he realizes that Babette has been taking drugs to negate the fear of death, and so he goes to this quest in finding out what this drug is and how his wife has been acquiring them.

Given what I have wrote here so far, I suppose many people would agree that this is a weird story, and that is what makes it beautiful. I find it witty and charming that this book seems deranged, and yet there are plenty of times in which I would not bee surprised to find myself doing and saying the same things that they are doing and saying. Plenty of people find me weird and unconventional, so I kinda see the wavelength that this novel is coming from.

Perhaps the most interesting thing that this novel tackles is the fear of death, and how ordinary people seem to be so obsessed by it. I suppose this novel satirizes it, but in reality, plenty of people are obsessed by death, and so they do so many weird things in trying to stop death from happening. They try to make their skin tighter, they try to offer stuff to deities, they try to eat healthier, they try to do so many things, just to halt death, or if not, just to prolong life for the most part. When in fact, death is just part of the picture, and it has always been. Entropy has always been part of the human system, and humans should just learn to accept that. In Jack's quest for the anti-death, he has become a killer, instead of the dier, when he takes the handgun that has been given to him by his father-in-law, and shoots the supplier of the drug that he was after.

This is a bizarre novel. It felt like a David Lynch film, and for that, I am giving it 4.5 out of 5 stars. 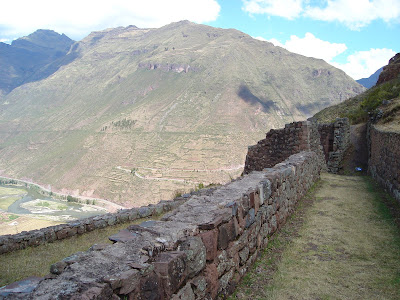 (Elevated Path, from my Pisac Series)