September 11 is coming up. This is such an interesting date, that plenty of interesting events have occurred and will occur. 9 years ago, the world watched as several planes crashed into the Twin Towers and resulted in the most catastrophic terrorist act on record. I clearly remember where I was that time: we were unloading our shipment from Guam, as we have just moved back to Manila from Guam a month ago. So we had the truck parked in front of our house, and we were unloading the boxes, when friends just called us and told us what happened.

But let's get back to the Quran burning issue. Hillary Clinton thinks that the act is disgraceful, while New York City Mayor Michael Bloomberg thinks that it is okay.

I actually side with Bloomberg on this one. I agree that it is distasteful, but that Florida pastor has every right to burn a book, whether it is the Quran or not. I value freedom of speech and individual rights, so I am fine with this pastor burning Qurans, the same way as I am fine with Andres Serrano submerging a small plastic crucifix into a container of his own urine and taking a photo of it. I am fine with writers writing novels that feature alternative accounts on supposedly holy events, such as Nikos Kazantzakis' The Last Temptation of Christ, or Salman Rushdie's The Satanic Verses. I do so because I place a higher value in self-determination and freedom of speech, as opposed to religion and the fear of offending someone else.

Granted, I agree that burning a Quran is distasteful. Submerging a Jesus icon in urine is also distasteful. But I wouldn't want someone to dictate to me that they are indeed distasteful or not. Because this is after all a subjective matter. If we start dictating to people what we can and cannot do, then the list will never stop. Pretty soon every movement we will make will be offensive to someone out there in the universe.

Religion is such a powerful element that it can stir people to do strange and irrational things. I wonder why people still think that religion is such a vital part of their lives, when there are so many data points pointing to the contrary. Perhaps the need to believe in something supernatural is just so strong that it trumps everything else. Perhaps, in a personal Utopian world of mine, the world would be so much better if religion simply did not exist. However, as much as I would like that world, I understand that I cannot dictate that to others, and others have the freedom to believe in anything they want to believe, even if it amounts to believing in a supernatural entity.

I saw a T-shirt once saying "Science flies people to the moon, Religion flies people into buildings." I know it refers to 9/11, and to some degree, I share the sentiment. I know that science can also be malefactive (atomic bombs for example), but at least science proceeds with empirical methods. Religion on the other hand can foster radical derivatives (such as suicide bombings) and these tend to be volatile, unexpected events, a decision that was the product not of empirical systematic reasoning, but of pure dogmatic guidance. And that is something that I have issues with.

It makes me think that Karl Marx was right, when he said that Die Religion... ist das Opium des Volkes. Feed your citizens the right poison, and they'll move according to your whim. 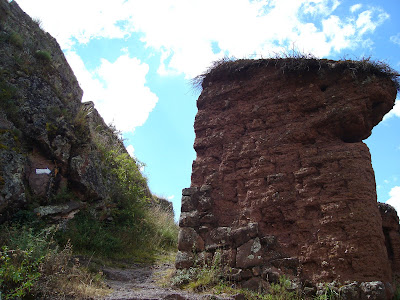 (Mud Gate, from my Pisac Series)