Death of a Bottle

First, there was Davidoff's Cool Water, given to me as a present. Then there was Clinique's Happy, which I got I think in Guam. There was also Dunhill Desire, which was given to me by my sister back in 2001. There was also Sculpture by Nikos, which I first smelled when I playfully choked a Japanese friend of mine, and his scent transferred to my fingers. I also had a bottle of Givenchy's Insense Ultramarine, but unfortunately, some burglar took it away before I could finish it. And speaking of Givenchy, I also once had a bottle of Pi, which I finished here in Buffalo.

And now, the latest casualty, is none other than Yves Saint Laurent's M7. I bought this back in January 2004, when my sister and I sent our parents off when they moved to Vienna. We were with them in the airport, and we got special passes to actually get inside the airport and cross Immigration, something that normal people usually don't do. So I got to browse the duty-free shop in Manila International Airport, before their Lufthansa flight departed for Europe that night. So it took me 6 years before I finished this bottle.

I loved that scent, but since I think life is too short to repeat colognes, I don't think I'll be wearing that scent again.

Now I am working on Voyageur by Jean Patou. This is a cologne released in 1995, but I got it in 1997, in Osaka's Kansai International Airport. I've had it for 13 years now, but I haven't been using it much, due to physical circumstances. I had this bottle with me from 1997 in Japan, and brought it with me to Guam, and to the Philippines. When I moved to Buffalo however, in 2005, I did not bring it with me, as I had plenty of cologne bottles and there were more important things to put in a suitcase. Thus, it was just stored in Manila. Then, early this year, my sister went back to the Philippines, and so I asked her to bring it here. Thus, when I visited my sister in March, I brought it to Buffalo with me. This will be my daily scent now, until it expires. After that, I still have four more bottles. 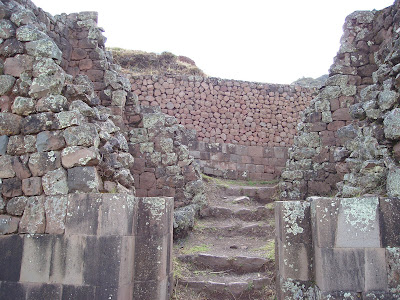 (Entrance, from my Pisac Series)