Last Thursday, I was on a plane, flying from Buffalo to New York City. It was these small Canadair Regional Jets, that only have about 50-something seats. And on top of that, it was also raining, or rather, it was pouring. There was a thunderstorm.

Obviously, there was plenty of turbulence. Very bad in fact, and we just went up and down, and I just followed the rock and roll of the aircraft, instead of resisting it. I was sitting next to the window (as usual), and somehow, my thoughts went to death and dying.

I don't know why, but I figured that if I died in that storm, if for some reason, my airplane crashed, if somehow we went down and I got killed by getting burned in a great majestic ball of fire, I think I would be fine with that. They say that the most dangerous times of a flight is during take-offs and landings, and during the take-off, even before going up to cruising altitude, we were already hit by turbulence. The houses were still quite large, and yet we were already swaying left and right.

Anyway, they say that people do a mental scan of their past whenever they think they are about to die. In a way, I also did, but not as fast perhaps. I am not saying I encountered a near-death experience. All I am saying is that there was a time that somehow provoked me to think about death, and then I realized that if I die now, that would be okay. Undesirable, but there's nothing I can do about it. Do I have any regrets and things that I wish I would have done but haven't? Not really. As far as I am concerned, I am not living a lie, I am not faking things, and if ever there was the unfortunate incident of my death, it may be premature, but there's nothing I can do about it.

Of course, there are plenty of other things that I would like to do in this earth while I am here, but I also believe that with order comes an equal dose of chaos. And that is something I have no control over. 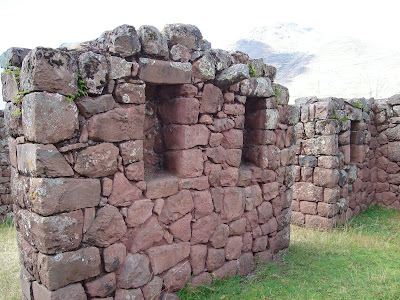 (Fake Windows, from my Pisac Series)