Today, I experimented in the kitchen once more. And it seems that it is a success. What did I do this time?

Well, I bought mushrooms, tons of them. I bought four kinds actually. I bought shiitake, crimini, white pearl, and ordinary button mushrooms, each about 5 ounces. This would be the basis of my experimental pasta sauce.

So, while I had a pot of water on its way to boiling, I chopped a big onion, into diced pieces. I also melted 4 tablespoons of butter, and once that was melted, I sauteed the chopped onions in it. Once the onions were a little tender, I stirred the mushrooms into the pot. That would be until they are tender. I also bought a packet of sage, so I chopped up the sage leaves and then mixed them inside.

Now, the mushrooms are all tender, so I put about a teaspoon each of salt and pepper into the mix. Then, I put a half-cup of white wine. And that was just marvelous. Now, obviously, I wanted a white sauce, so I poured a cup of half and half into the mix, and one-fourth cup of shredded Parmesan cheese. I also put one-fourth cup chopped capers inside. I stirred the whole thing until it simmered for about 5 minutes and bubbly.

I loved the smell, and the taste was perfect as well. Funny, because I never used a recipe for this one. I just had a bunch of ideas and figured out which ones would go well together. I haven't had experience cooking with sage: most of the time, I just saw them as decorations accompanying a cup of liver pate, for example. But I liked the smell of the leaf, so I decided to use that. And the white wine, well, while I was in the supermarket, I didn't plan on using that, but I looked into my cupboard while cooking, and I saw that I still have some white wine. And so I decided to put it in, and it turned out well! 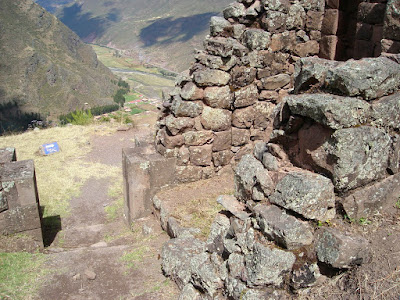 (Rock Entrance, from my Pisac Series)