Lost in the Forest

Yesterday, we went hiking in the Allegany State Park, which is a large state park located south of Buffalo, near the Pennsylvania border. It was about an hour and a half drive from where we live.

The weather was great, the temperature was just fine. It was around 20 C, and the sun was hidden by the trees, and everything was just perfect. We decided to bring some sub sandwiches as a picnic lunch, and after digesting half of it, we embarked on a trail, that was about 4 miles long. Apparently, according to the map, there is a scenic area at the end of the trail.

The trail happened to be a loop: the North Country Trail passes through the state park, and we had to walk part of it in order to get to the Eastwood Meadows Trail, which is what we wanted. So we parked the car off the road, and found the entrance to the trail. We followed the white blazes on the trees, and then there was a fork at the trail, and we took the fork heading to the Eastwood Meadows Trail, which was marked in blue.

This trail is supposed to be a loop, as it starts and ends at the same spot. At the other end, there was supposed to be a scenic area. We started this one, but then weird things started to happen. First, we couldn't find the scenic area. I had my camera with me, and given that the map labeled it as something worth taking photographs for, I was excited. But somehow, we couldn't find it, or rather, it was scenic to some, but not to all.

Second, we got lost. There was a meadow where the loop started and ended. And the weird thing is, once we got to the loop, we got confused, because it felt like the path began again. And nobody else was there. Later on, we figured the trick, that the meadow was tricky, and it looked the same in both directions, either from the east or the west. That basically solved the problem, once we decided to venture further, and then we found the way out.

It was rather interesting, and it taxed my patience. The thing is, given my personality, it would be very dissonant to engage in such an activity as hiking, given my fondness for evidence. I guess hiking needs a little dose of faith. You have to trust that the people who passed the path before you are not misleading you when they marked the trails. You have to trust that the markings you see on the trees are indeed correct, and that the path you are taking will eventually lead you back to your destination.

See, the thing is, I like evidence. I don't mind doing things, as long as I have evidence that supports the desired conclusion. However, with hiking, as one doesn't know the path, going further and further the trail doesn't necessarily give oneself evidence that one is getting closer to one's destination. And yet I do it. Bizarre.

The good thing is that my companion was a rational human being as well. When we got lost, nobody panicked. I guess my stress scale went up to 4, on a scale of 1 to 10. And really, when we got lost and didn't know which direction we were in, the sounds of the forest started becoming more and more pronounced. I started imagining bears and other creatures that probably have big teeth and can tear me to pieces. Fortunately, nothing like that happened.

Anyway, it was rather an interesting experience, getting lost in the forest. Eventually, we found our way back, and the evidence that we are on the right track piled up higher and higher, and so I was happy.

Would I do it again? Of course, it's still fun, and there isn't a constraint that pushes the system to conclude that it is a bad activity. 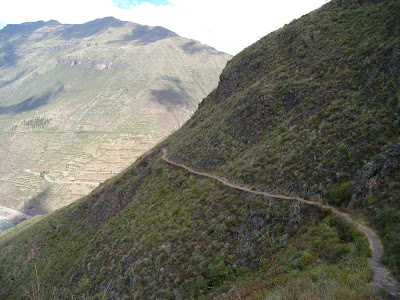 (Path to Pisac, from my Pisac Series)