So the other day, I finally got to watch the movie Avatar. I usually do not watch movies that have so much hype in them, because I get this idea that I don't want to watch a movie just because everyone else is watching it. So, unless I am in the Philippines (in which the most accessible form of entertainment is watching movies), then I typically don't watch movies during the first week of their release.

Anyway, so many people have told me that I should watch Avatar, so finally we did. And frankly, that was one of the most boring films that I have ever seen.

Yes, the film was pretty. The effects were wonderful, however, the story was very much lacking. I put greater importance in the plot, than the effects, and given the movie, I didn't like it.

I mean, within the first thirty minutes of the film, I was bored. I was already fumbling with my phone and doing something else, because really, the movie wasn't engaging me. At every point in the movie, I knew what would happen. I knew that the military general would be the enemy, I knew that there would be conflict between the Na'vi and the humans. I knew that Jake Sully's allegiance would shift. I knew that humans are evil. What else is new?

I really didn't think that this movie needed 2 hours and 42 minutes to portray that. I was really bored, and due to that, I never got the hype. It kinda shows that the intended audience is such that they are dumb. The movie's intended audience is someone who doesn't like thinking and being engaged by the movie, who is content to someone being spoon-fed with visual data, and yes, the pretty effects of the movie did that. While watching that film, I was always a few steps ahead. Was it engaging? Not at all.

So, I do not recommend this film. You will have better things to do with the 2 and a half hours that you'll waste in seeing this film. 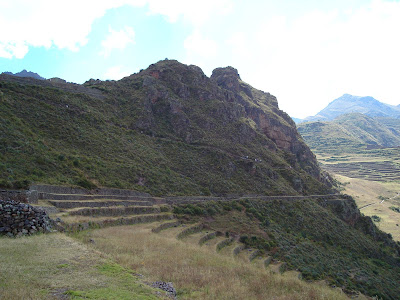 (Mountains and Stones, from my Pisac Series)