Now that the semester has started, there's more examples of how youngsters in college are somewhat of a different generation than I am.

Last Monday, on my very first class, I entered the classroom, together with my classmates. We were chatting, and then suddenly, I turned around and saw a young man, perhaps a freshman, and he asked me where 6 Clemens was. We were on the second floor, and the rooms were numbered in that floor from 200 upwards. I told him that 6 Clemens was in the basement.

Then in Tuesday, I was about to enter my lab, it was around 4:05 PM, when there was a girl who basically almost grabbed me, and told me that she had a class that starts at 4:10 PM, she even told me what the class was, and she said that there's a lady talking to a class in the room that was assigned for her, and she didn't know what to do. I told her that in my department, nothing starts at a weird time like 4:10 PM, so I wasn't sure whether she had the right time, and if she really was sure that she was at the correct room, then she should go in and ask.

I had a friend who was teaching, and she got an email from a student saying that the student was lost in the first day of class, and couldn't find the classroom, which was apparently in the basement. The interesting thing is that this student wasn't a freshman, and he should have known better.

I know, I actually like the fact that these people asked random people, like me, instead of just dwelling in their heads and embarrassed to ask someone, but at the same time, I am appalled at the lack of brain ability these people have. If a class is said to be located in Room 6, and you're at the second floor and all the room numbers were 200 or above, would it not dawn on you that first floor would contain all rooms from 100-199, and the basement should have rooms from 1-99?

And if you're really sure that your class is in that room, and yet there seems to be someone who is occupying it, wouldn't it be better to ask directly the person occupying it?

I have this idea that the current college generation seems to be so used to spoon feeding now, that they actually forgot to use their brain. If that is the case, then that is a sad sad thought. 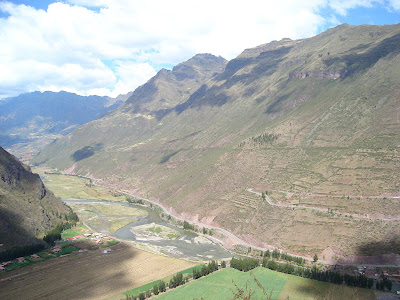 (The Sacred Valley, from my Pisac Series)