So we watched Conversations with Other Women the other day. And contrary to the previous movie that we watched, which was Avatar, I actually liked this one. Granted, there are significant differences with respect to the genre, but I think there are higher-ranking constraints that Conversations satisfied, but Avatar didn't.

First, there is the issue of predictability. Avatar was so predictable. Conversations was also predictable to some degree, but at least, you don't know how the story will develop toward that predicted direction. There are twists and turns in the story. And because of this, I could say that Conversations engaged me more than Avatar. Avatar was so easy to watch, one could just sit there passively, while Conversations actually kept me on my toes, because of the dialogue and the mental engagements that the story provided.

Second, there is also realism. Perhaps, that is the reason why I never liked reading science fiction, is that the story is so out of this world that I cannot relate. I don't read fantasy that often either for the same reason. Conversations was a love story about two people who used to know each other, and the drama that they were dealing with were real: there is no happy ending, and most of the time, life is like that.

So, perhaps I learned more about myself and my movie preferences after watching two different movies back to back. Hmmm, interesting, eh? 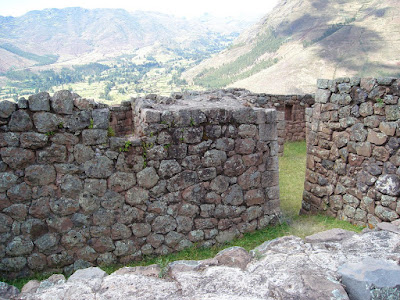 (Old Rooms, from my Pisac Series)