So my favorite show is back, nothing but The Amazing Race. They are now on their seventeenth season, and I am amazed and excited that they are still around. I remember being in college and watching this show, getting excited at the various places that they visited. And the same thing for this season, I am still excited at the places they go to.

So again, they have 11 teams that race around the world. Given that there is just the first episode, I cannot see a general trend yet, but there have been interesting teams. I again get the reinforcement that Americans typically are ignorant, and this has been exemplified by Nick and Vicki, who doesn't even know the country they are in. Hello, there is no such country named London. That was just pathetic.

Also, I am quite sure that as much as I like the idea of the race, I don't think I would want to join. I think I'll be so entrenched in the excitement of traveling, that I would not have time to actually appreciate the place, something that I value highly. So I'd rather just do the trip on my own pace, instead of worrying about the pit stop.

People should always ask for directions. It seems that they see that as a weakness, and when you're in a foreign country, what's wrong with asking others where you are? Otherwise, you get lost and all you end up doing is driving round and round in foreign highways.

Oh, and I am glad that they are going to places that they haven't been to before, such as Ghana and Bangladesh. That is awesome. I saw the preview of the next episode where they go to Ghana, and somehow I felt excited, wondering what it would be like in a place like that, where things are chaotic, strange people are plentiful, and so on.

One can only dream. Hopefully the dream gets realized someday. 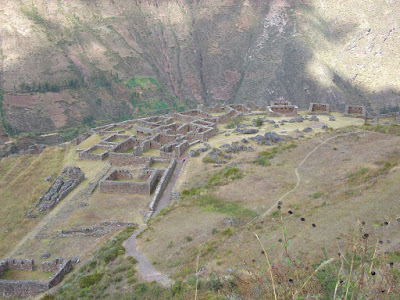 (Pisac from Above, from my Pisac Series)